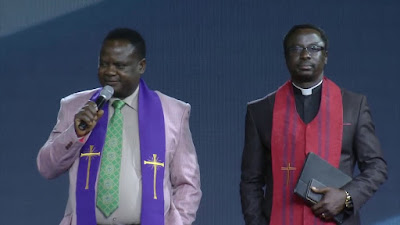 Just a week ago a case against a pastor, Biodun Fatoyinbo of Commonwealth of Zion Assembly (COZA), who was accused of rape by a former congregant, Busola Dakolo, was thrown out of court.


Since the accusation was made, rape has been in the forefront of national discourse, especially those perpetrated by people in power: pastors, lecturers, etc.
Seeking to insert itself into the conversation, the Women’s Wing of Christian Council of Nigeria organised a summit in Abuja, themed, “Elimination of violence against women and children,” Punch reports.
There, the Chairman of the north-central zone of CAN, Israel Akanji, (one of the pastors who visited Fatoyinbo after the accusation) said that while we wait for a law to deal with rapists, it is important that folks warn their kids to not “expose body parts” and “appear as if they are inviting rapists to their lives.” Women are careless with their female children, he said, and that is why rape is on the increase.
We noticed that most women are careless about the female child which is why the issue of rape and other heinous crimes are on the increase. It is necessary for women to know that there are things that they should not allow.
Rapists should go to jail, the government should know better; but I believe that it is not good for a man to molest a child and go free. To me, it should be made a capital offence, if it means killing the rapist, let the rapist be hanged.
When people wear mini dresses, sometimes they even wear it to church we must speak against it in churches. Some of us try not to talk about it because we feel if we talk to them, they may not return to our churches.
The church has to come up with tough measures against indecent dressing; indecent dressing must not be accepted in the church of Christ.
Even the Bible teaches that people must dress decently to be in the House of the Lord.
The Bible says thou shall not steal, kill and commit adultery. These are considered to be grievous sins in the Bible, but people who rape, should be considered as very serious criminals.
The problem we have in Nigeria is anonymity, people don’t want to talk when raped, parents don’t want their children to say it because they feel it will bring a bad name to their family and that is why it has continued. If rape cases are reported in good time and adequate measures are taken, a lot of things will change.
I want to appeal to parents that while we are waiting for a law that will deal with rapists (I know that laws exist right now), parents must warn their children. Some children dress in such a way that they appear as if they are inviting rapists to their lives. They are almost naked, they expose body parts that some people cannot control themselves. Let us return to the culture of decent dressing, it may not stop but it will minimize it.
Features