Barcelona's worst ever signing? How Keirrison's Camp Nou dream turned into a nightmare 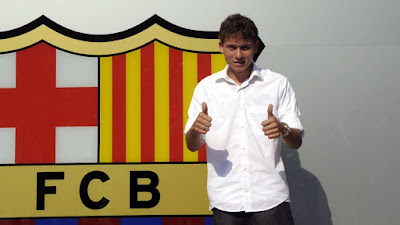 For a club the size of Barcelona, it's inevitable that not all of their signings will work out. As Lionel Messi once opined, not everyone can cope with the pressure of playing at Camp Nou.


Nonetheless, the Blaugrana's €14 million (£12m/$15.4m) acquisition of Keirrison in 2009 ranks as one of their most bizarre transfer failures.
The Brazilian was just 20 at the time and considered one of the most promising forwards in world football. A decade later, he is a free agent, left wondering where it all went wrong.
A player who should have proven one of Barca's best ever signings is now remembered as one of their worst.
To say Keirrison's career began with a bang would be an understatement.
As a teenager, he helped Coritiba earn promotion to Serie A before then excelling in their first season back in the top flight.
Across the 2008 campaign, he scored a stunning 41 goals in just 58 appearances, playing a fundamental role in the club's Campeonato Paranaense triumph.
His 21 league goals saw him finish as Serie A's joint-top scorer – the youngest player to do so at the time.
A transfer to Palmeiras quickly followed in January 2009 but it was clear Keirrison's time in his homeland would be short-lived as his goal-scoring exploits had already turned heads in Europe.
While Liverpool were linked, it would be La Liga giants Barcelona that managed to secure his signature just seven months after he had put pen to paper with Palmeiras.
So impressed with what they saw of Keirrison, the Catalans handed the striker a five-year contract.

“I hope to break into Pep Guardiola’s side, and join many other famous Brazilians who have played here," Keirrison said after arriving in Catalunya in July 2009.
“This club are the best in the world, and I am very lucky to be here so young. I have time to show my talents and win titles.
“I always followed Barcelona and the Brazilian players who played here.
"Now, at 20 years old, I am very happy to be here, fulfilling my dream of playing at the best club in the world."
However, Guardiola, who had just led Barca to a historic treble in his first season at the helm, had other ideas for Keirrison.
While clearly impressed by what the attacker had achieved in Brazil, he made it clear that Keirrison wouldn't be wearing a Barcelona shirt any time soon.
“He’s very young. He's got some great statistics. It’s difficult to find a goalscorer," Guardiola said. "The club has decided to sign him but he’ll go out on loan. I won’t be counting on him for this season.”
Keirrison would, in fact, never line out for Barcelona in a competitive game, instead spending the next five years failing to impress or even secure regular game time at a host of clubs.
Benfica was the youngster's first stop but then-coach Jorge Jesus made it clear Keirrison wasn't in his plans after just seven goal-less appearances for the Portuguese outfit.
Italy would be the attacker's next port of call, with Fiorentina agreeing to take him on loan for 18 months in January 2010.
While getting slightly more game time at the Stadio Artemio Franchi, and even scoring twice in Serie A, Keirrison failed to convince the Tuscans that he was worth keeping.

Indeed, the Viola decided to bring a premature end to Keirrison's stay in Florence after just six months and the player suddenly found himself back in Brazil in July 2010, on loan to Santos.
He was part of a Copa Libertadores-winning squad but not as a starter and was shipped off to Cruzeiro and then Coritiba in a short space of time, with successive knee injuries not helping his bid to kickstart his career.
Consequently, in 2014, Barcelona finally cut Keirrison loose.
Rather than starring in La Liga, he now found himself back where his senior career began with Coritiba, but only this time with far more baggage.
Failing to recapture his form with his former club, he decided to drop down a level to join second-tier Londrina in 2016 but even that didn't help Keirrison rediscover his goal-scoring touch, with the forward netting just seven times across 27 Serie B appearances.
A move back to Serie A in 2017 then backfired as he played just three league minutes for FC Arouca before returning to Londrina. While handed game time early on in the 2018 season, Keirrison failed to fire and disappeared completely from the squad before being let go at the end of the year.
Article continues below
As it stands, Keirrison's last competitive goal now dates back to August 2016, with clubs unsurprisingly steering clear of a now 30-year-old free agent who can't score and is struggling to stay fit.
All in all, it's been a dramatic and sad fall from grace for a player touted as a potential superstar when he arrived at Barcelona just 10 years ago.
Signing for the Catalans was a dream come true for Keirrison but it turned into a nightmare from which he has yet to awake.
Sports