ATP Finals: Rafael Nadal confident of being fit to battle Novak Djokovic for number one 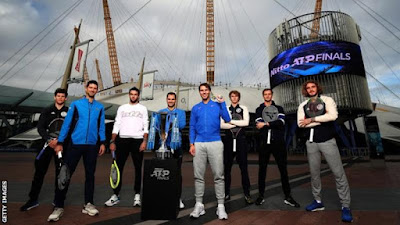 Nadal, 33, pulled out of the Paris Masters last week with a stomach injury but has travelled to London.


The Spaniard overtook Djokovic at the top of the rankings this week but could lose his position as year-end number one to the Serb at the O2 Arena.
Nadal is confident of playing a "good level" in his first match on Monday.
"If we were thinking we would not be able to play, we would probably not be here," he told BBC Sport.
Nadal, who has never won the season-ending championships, meets defending champion Alexander Zverev on Monday but said he only started serving "very slowly" on Thursday following the injury.
"I am confident that I can be very competitive - but of course it's a tournament in which you will face the top guys from the beginning, so you need to be 100% ready," the 19-time Grand Slam champion said.
"But I really hope I will be able to serve every single day a little better and my hope is to be serving normally on Sunday."
Nadal did not play in last year's ATP Finals because of injury and pulled out of the 2017 event with a knee problem after one match.
If he wins the title, he is guaranteed to finish the year as number one - but otherwise, the door could be open for Djokovic.
The Serb will finish the year as number one if he wins the tournament and Nadal does not reach the semi-finals.
Alternatively, if the Spaniard does not play, or fails to win a round-robin match, Djokovic will overtake him if he wins two group-stage matches and reaches the final.
The Serb said ending the year as number one is among the "two biggest achievements" for a player, along with winning a Grand Slam.
"At this stage of my career, in terms of goals and achievements obviously that's right at the top," he said.
Djokovic, who could equal both Pete Sampras' record of six year-end number one finishes and Roger Federer's tally of six ATP Finals title wins, plays the first singles match on Sunday against Italian eighth seed Matteo Berrettini at 14:00 GMT.
The tournament features the top eight players of the year who are split into two groups, each playing a round-robin format. The top two in each group progress to the semi-finals.
Djokovic has been drawn in Bjorn Borg Group alongside Federer.
It means they will meet for the first time since Djokovic beat the 20-time Grand Slam winner in a tie-break in July in the longest Wimbledon singles final in history.

The debutants leading the 'next generation'

Nadal, Djokovic and Federer are the top three seeds in London, as they were when they first competed in the tournament together in 2007, but there are also three debutants hoping to take the title in the 2019 field.
The highest ranked of those is 23-year-old Russian Daniil Medvedev, the world number four.
He reached a remarkable six finals in a row from July to October, including a dramatic five-set defeat by Nadal at the US Open, plus wins in Cincinnati, St Petersburg and Shanghai, and he was the first player after the 'Big Three' to qualify.
World number six Stefanos Tsitsipas, 22, is the youngest player in the field and comes into the event with two titles to his name in 2019 - in Estoril and Marseille - after earning the biggest match victory of his career in January at the Australian Open, defeating Federer en route to the semi-finals.
Berrettini, 23, was ranked 57th in the world in March but has rapidly climbed the rankings and clinched his place in London last week.
Zverev returns to the finals again, having won the title on his debut appearance last year, and is the fourth player aged 23 or under to qualify.
The German has found 2019 more difficult than last year, winning only tournament this year, while Austrian Dominic Thiem, 26, is looking to make the semi-finals for the first time on his fourth appearance.

With Andy Murray absent as he continues his comeback from injury and brother Jamie failing to qualify with new partner Neal Skupski, Britain's sole representative in the tournament is Joe Salisbury in the doubles.
The 27-year-old Londoner and American partner Rajeev Ram are seeded fourth and open the tournament on Sunday at 12:00 GMT against Raven Klaasen and Michael Venus.
Salisbury and Ram only began playing together at the start of the season but made the final at their first tournament together, in Brisbane, before winning titles in Dubai and Vienna.
It will be Salisbury's first appearance at the ATP Finals, although he was a 'hitter' four years ago, helping singles players such as Djokovic and Stan Wawrinka practice.
Other notable pairs include top seeds Juan Sebastian Cabal and Robert Farah, French Open champions Kevin Krawietz and Andreas Mies and French pair Pierre-Hugues Herbert and Nicolas Mahut, who completed a career Grand Slam by winning this year's Australian Open.
Sports