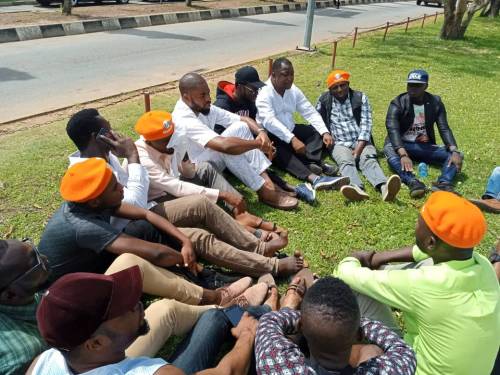 Human rights activists on Saturday commenced a sit-out at the headquarters of Department of State Services in Abuja over the agency's refusal to release Omoyele Sowore and Olawale Bakare.


The protesters, who were at the facility on Saturday morning to receive the activists, were denied access alongside  one of Sowore's lawyers, Marshal Abubakar, and some members of his family.
One of the coordinators of the sit-out, Lanre Legacy, described the action of DSS in flouting court orders and holding  Sowore further as an invitation to anarchy.
He said, "It means we don't have a country that is working because the government has failed to respect itself its own institution.
"That is anarchy, we are in the jungle.
"We are calling on the government to respect the rule of law."
On his own, Convener of Concerned Nigerians, Deji Adeyanju, called on President Muhammadu Buhari to order the Director-General of the DSS to release Sowore in the interest of justice.
According to him, "We have spoken to some senior staff of the service but they are telling us that they are not around in the office.
"We know that is another plot to keep Sowore unlawfully beyond the time specified by the court."
Adeyanju said the group would continue to carry out and sustain the sit-out on daily basis until Sowore was released.
News