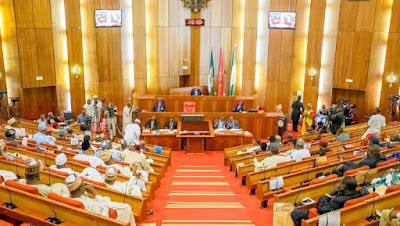 The Nigerian Senate is on a roll, sitting through, deliberating and passing bills. After the Social Media and Sexual Harassment bills a week ago, on Tuesday they sat to deliberate on a bill against Hate Speech.


The Cable reports that the bill, “National Commission for the Prohibition of Hate Speeches Bill 2019,” was sponsored by the Deputy Majority Whip of the Senate, Sabi Abdullahi.
There are no details yet on the contents of the bill, but an old bill sponsored but not passed in the previous assembly had described hate speech as when:
A person publishes, presents, produces, plays, provides, distributes and/or directs the performance of any material, written and/or visual, which is threatening, abusive or insulting or involves the use of threatening, abusive or insulting words or behaviour, commits an offence if such person intends thereby to stir up ethnic hatred, or having regard to all the circumstances, ethnic hatred is likely to be stirred up against any person or persons from such an ethnic group in Nigeria.
News