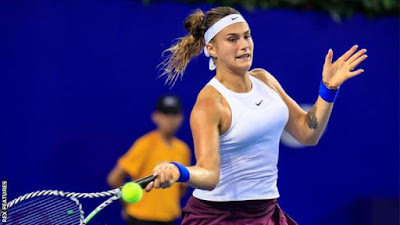 The 21-year-old world number 14 from Belarus cruised to a 6-4 6-2 victory over the Dutch top seed to win the second-tier version of the season-ending WTA Finals.


All three of Sabalenka's titles in 2019 have been won in China.
She also won the Wuhan Open in September and Shenzhen Open in January.
The WTA Finals, for the top-ranked players, begin on Sunday in Shenzhen. Sabalenka will be competing in doubles there, where she and Elise Mertens are the top-seeded pairing.
BBC Sport has launched #ChangeTheGame to showcase female athletes in a way they never have been before. Through more live women's sport available to watch across the BBC in 2019, complemented by our journalism, we are aiming to turn up the volume on women's sport and alter perceptions. Find out more here.
Sports