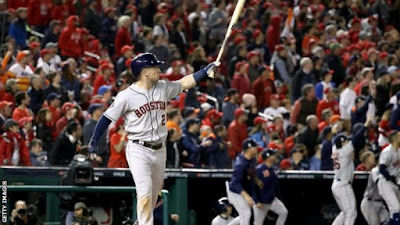 Having trailed 2-0, the Astros are again favourites to win the series.
Four consecutive singles helped Houston lead 2-0 in the first inning, before catcher Robinson Chirinos homered in the fourth to double their advantage.


The Nationals got a run back in the sixth, but Bregman's big blast in the seventh sealed the victory.
It means the Astros have ensured that the series will return to Houston for a sixth game on Tuesday, and a potential decider the following day.
The visitors got after Nationals starter Patrick Corbin straight away, becoming the first team to record four successive singles in the first inning of a World Series.
And Houston were sitting pretty when Chirinos went deep for the second successive night with a two-run home run off left-hander Corbin, who threw six innings but took the loss.
Lacking a traditional fourth starter on their roster, the Astros had planned a "bullpen game", sharing the pitching duties among their relievers, but Mexican rookie Jose Urquidy - who began 2019 at Double-A level in the minor leagues - gave them a perfect start, throwing five scoreless innings.
But his departure opened the door for Washington, as pinch-hitter Gerardo Parra - with the crowd revved up by the "Baby Shark" walk-up music that has made him a cult figure at Nationals Park - drew a walk, but despite loading the bases, the hosts could only manufacture one run.
Houston immediately made them pay as third baseman Bregman's big shot to left field, off veteran Fernando Rodney, stretched the lead to seven runs - and the Nationals did well to escape further damage when the bases were loaded for a second time in the inning.
Game five takes place on Sunday evening (midnight GMT) in Washington, with game one starters Max Scherzer (Washington) and Gerrit Cole (Houston) set to lock horns again.

BBC Sport's Seth Bennett at Nationals Park:
"The Astros have their swagger back. It inexplicably deserted them in games one and two with the batting line-up looking a pale imitation of the team which won 107 regular season games. Washington looked shell-shocked by the seventh inning, with many of the crowd electing to go home rather than watch the final few outs.
"The Nationals' victories in Houston gave them belief that they were ready to be champions, but the manner of Saturday's defeat could erode their confidence. Manager Dave Martinez will also be wondering what happened to his hitters, two runners on base is not enough.
"The neutrals are hoping that this series is finally going to spring into life and we are going to see both teams playing somewhere close to their best at the same time."
Sports