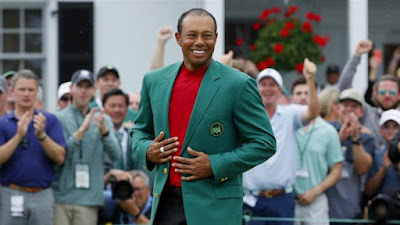 US President Donald Trump has said he will award Tiger Woods the Presidential Medal of Freedom, the highest civilian honour in the country, a day after the golfer won the Masters for the fifth time.


The victory on Sunday was one of the greatest comebacks in sports, as the 43-year-old ended an 11-year major title drought having overcome personal and professional setbacks including a highly-public divorce and multiple surgeries.
Trump said that he congratulated Woods on his "incredible success". The president didn't say when a ceremony will be held.

Donald J. Trump ✔@realDonaldTrump
Spoke to @TigerWoods to congratulate him on the great victory he had in yesterday’s @TheMasters, & to inform him that because of his incredible Success & Comeback in Sports (Golf) and, more importantly, LIFE, I will be presenting him with the PRESIDENTIAL MEDAL OF FREEDOM!
166K
6:35 PM - Apr 15, 2019
Twitter Ads info and privacy

49.3K people are talking about this
Woods' one-stroke victory at the Augusta National on Sunday was his 15th major win in a storied career that was derailed in 2009 when more than a dozen women claimed they'd had affairs with the golfer.
He also came under scrutiny when he was arrested for driving under the influence in 2017, which he blamed on an unintended combination of prescription drugs.
Woods also had to overcome a series of injuries to regain his form, including knee surgery, an ACL repair and several Achilles strains.
The win led to an outpouring of support from sports greats and politicians.
Trump, an avid golfer, and Woods have played together in the past including in February when the pair joined golf great Jack Nicklaus for a round at the Trump National Golf Club in Jupiter, Florida.
Trump appeared to follow the action at this year's Masters closely, tweeting well-wishes to the field on Saturday and encouraging people to tune in when Woods had the lead with just two holes left to play on Sunday.
"Congratulations to @TigerWoods, a truly Great Champion!" Trump tweeted shortly after Woods sank a short putt to secure the title.
"Love people who are great under pressure. What a fantastic life comeback for a really great guy!" he added later.
The Presidential Medal of Freedom is given annually to people who have made outstanding contributions to the security or national interests of the country, to world peace, or to cultural or other significant public or private endeavours.