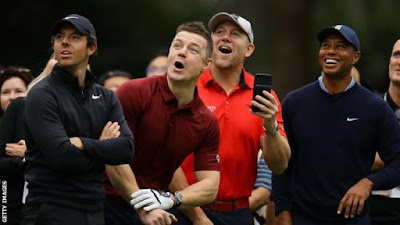 The world number 10, who ended an 11-year wait for his 15th major in April, had arthroscopic surgery in August to repair cartilage damage.


The 43-year-old American is now in Japan to play in the US PGA Tour's inaugural ZOZO Championship.
"I'm probably a week early," he said. "It's been nice to be able to squat down and read putts."
Woods added: "My season had ended a little bit earlier than I had expected. I had the procedure a little bit early and got ahead of it."
Prior to the ZOZO Championship, which begins on Thursday, Woods competed alongside Rory McIlroy, Jason Day and Hideki Matsuyama at The Challenge: Japan Skins.
The exhibition match - where players compete for holes for between $10,000-$100,000 (£7,700-£77,000) - was staged at the Accordia Golf Narashino Country Club in Chiba, which is the same venue as the ZOZO Championship later in the week.
Woods intends to round off his year by playing in the Hero World Challenge from 4-7 December before being USA captain at the Presidents Cup.
He may use one of his four captains picks for the match against Ernie Els' international team at Royal Melbourne from 13 December.
"I thought that I had enough time to rehab it correctly and be ready for this event, be ready for Hero, and I'm going to Australia either way, whether I'm playing or not," said Woods.
"It [his recovery] made me more hopeful that I could play this week, play Hero and play Australia. The way I was feeling towards the middle part of the year, it was going to be a tall order to be able to do it all."
Sports