'There is no creativity' - Can Solskjaer get Man Utd scoring freely again? 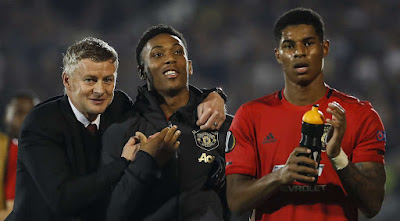 On the face of it, Manchester United are a curious case.
They have impressed in their games against the best teams they have played so far this season – Leicester City, Liverpool and Chelsea – yet struggled against the Premier League's smaller sides.


However, their issues with opposition of supposedly lesser quality are easy to explain.
United are able to play on the counterattack against sides who have the confidence to focus on their own forward lines.
Brendan Rodgers, Jurgen Klopp and Frank Lampard have the know-how and the players to try to outscore their opponents. The best chance of victory they possess is to exploit the pace and technical ability of their forwards, and supplement those attempts with the rest of their resources.
Such an approach does not seem to work against Ole Gunnar Solskjaer’s squad, who are capable of soaking up intense pressure, with summer signings Aaron Wan-Bissaka and Harry Maguire now making their presence felt in an increasingly sturdy defence.
In addition, Scott McTominay is an able defensive midfielder who does a fine job protecting the back four.
However, United's problems arise when they are forced to break down deep-lying opponents.
Marcus Rashford and Daniel James are blessed with such blistering pace that they can hurt any side on the counterattack – but their speed on the break is rendered useless against teams that sit back.
When faced with a blanket defence, United instead need to move the ball quickly – something that former right-back Paul Parker feels they are presently incapable of doing.
“United don’t have enough players who can play that game," he tells Goal. "They don’t play to get the ball or their midfielders into the box as quickly as possible.
"McTominay, for example, does not get into the penalty area often enough."

Certainly, United are struggling to score goals, with just 10 scored in their nine league outings to date while they have failed to score more than once in a match in any competition since their 4-0 victory over Chelsea on the opening day of the campaign.
Obviously the quality of the players has to be taken into account but there are concerns over the way in which they are being instructed to play – just as there were under Jose Mourinho, Louis van Gaal and David Moyes.
Indeed, there are those that believe that Solskjaer's coaching is not sophisticated enough for the modern game, that he lacks the requisite nous to show his troops how to break down defences.
Parker, though, says that under Sir Alex Ferguson – who oversaw the most successful period in United's history – the players weren't overloaded with tactical information.
“It was about how best to express ourselves," the former England international reveals. "There weren't necessarily too many instructions.
“In front of our back four was an excellent front six. That made our jobs easy."
The current United team does not have anything like the same standard of players, as underlined by the fact that Ashley Young started at wing-back in last weekend's 1-1 draw with Liverpool – and was caught out of position for Adam Lallana's equaliser.

“Young has played as a full-back for years but he still defends like a winger," Parker argues. "He doesn’t know how to track runners and, as a defender, you need to be aware of where your opponents are at all times – even when you think they’re offside.”
It could, then, be time to take a gamble on the 19-year-old Brandon Williams, who only made his debut against AZ Alkmaar at the start of October but impressed with his composure and attacking intent, both against Liverpool and in Thursday's Europa League win at Partizan.
Of course, Solskjaer has to choose between Young and Williams because of Luke Shaw's ongoing attempts to get back to full fitness and there is no denying that United have been unlucky with injuries so far this term.
Anthony Martial missed five Premier League games with a hamstring problem but made his comeback against Liverpool last weekend, coming off the bench for the final six minutes, before marking his return to the starting line-up by netting the only goal of the game from the penalty spot against Partizan.
The France international did not play particularly well in Belgrade but that was hardly surprising in light of his two-month lay-off. Besides, he was in something resembling his very best form before injury struck and his return is a huge boost for Solskjaer, particularly as the Norwegian appears to have decided that the desperately ineffective Jesse Lingard is no longer a viable option in attack.
United's squad is certainly not well stacked from an offensive perspective.
“Attacking is going to be difficult," Parker says. "There is not enough quick feet or quick decision-making. There is no creativity.
"Perhaps they will have to have another look at Juan Mata, who has been wasted in this team. At Manchester City, with better ball retention, the football would suit him better.”
United, though, do not hold on to possession nearly as well as their city rivals, meaning Mata has shone only intermittently to date.

Of course, Paul Pogba could be used as a No.10. But doubts remain over his focus and commitment to the cause, given he publicly admitted his desire to move on last summer.
“Pogba can make the difference if he actually wants to,” Parker says but he thinks that United need to start building towards the future without the wantaway Frenchman in mind.
Indeed, Parker would advocate giving more game time to youngsters such as Mason Greenwood, a versatile forward who has already shown why he has long been tipped to do great things at Old Trafford.
Parker would also like to see Solskjaer take a chance on James Garner, the 18-year-old box-to-box midfielder who impressed on Europa League duty in midweek, as he remains completely unconvinced by Andreas Pereira – despite the plaudits he received for last weekend's display against Liverpool.
“Is Solskjaer still going to persist with Pereira?" Parker asks. "I thought his decision-making was poor against Liverpool. He was looking for the glory pass or the glory shot.
“Would a better alternative not be Garner or even Greenwood instead of Pereira? Nobody knows quite what they offer and could provide the element of surprise.”
And that is essentially the bind that Solskjaer now finds himself in: continue to put his faith in players that have repeatedly underperformed or gamble on untested youngsters?
Article continues below
It is a tough call. But one that Solskjaer is going to have to make – and get right.
United's performance against Liverpool bought Solskjaer some time. But it will start running out again if United struggle at Norwich on Sunday.
It is high time Solskjaer's side flipped the narrative and produced one of their best performances of the season against one of the league's worst teams.
Sports