The economy looms large as Argentines head to the polls Sunday 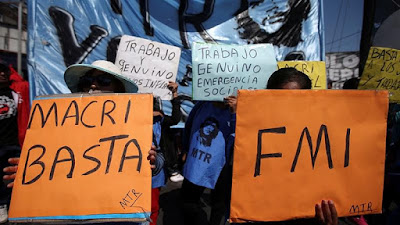 Buenos Aires, Argentina - The candy factory producing the brightly-coloured, honey-like confection Mielcitas had weathered several economic crises in its 40-year history - but the current one ravaging Argentina proved to be its undoing.


On July 11, the maker of Mielcitas shut its doors, leaving nearly 100 workers suddenly jobless in La Matanza, one of the counties that make up the economically ravaged "conurbano" region around Buenos Aires.
Most of the men and women thrown out of work were the sole breadwinners of their households. Many had spent around half their lives on the factory floor.
But not all of them are ready to give up on Mielcitas. A group of former workers has occupied the shuttered factory in the hope of turning it into a cooperative - a changing of the guard they believe is entirely possible should the centre-left, Peronist ticket of Alberto Fernandez and former President Cristina Fernandez de Kirchner capture the Argentine presidency when voters go to the polls this Sunday.
Sylvia Ayala, who represents the workers, blames incumbent pro-market President Mauricio Macri for the current economic crisis.
"We're the ones who are here trying to move forward, pouring our own sweat into it," Ayala told Al Jazeera. "We keep coming up against obstacles to form a cooperative, because it's not convenient for the government to have a cooperative, or a factory that has been taken over and run by the workers."
Ayala, who supports Fernandez's candidacy, said she is hopeful a left-leaning administration will be able to kick-start the economy, and with it, the factory's fortunes.
"People don't have money to buy bread, you can imagine they're not going to spend it on candies," she said.
For many voters in Argentina, this year's presidential election is first and foremost about fixing the economy. But whoever wins the office of the presidency will face the daunting challenge of escaping a vicious cycle that has drained the country's coffers and its spirits over decades - one that has seen the country lurch between the extremes of bloated government budgets and deep spending cuts in return for international bailouts. 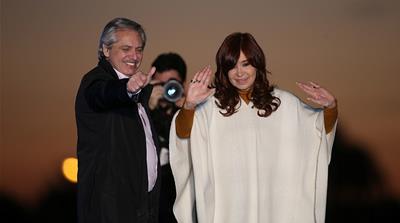 A maelstrom of discontent

Growing unemployment, poverty and inflation created a maelstrom of discontent that resulted in a stunning 16-point defeat for Macri in the presidential primaries on August 11.
Global markets reacted badly.
The Argentine peso lost a whopping 26 percent of its value in August, inflation is expected to hit 55 percent this year, and the prospect of the country defaulting on its debt payments - again - looms large.
Macri responded to the post-primary nose dive in Argentine assets with capital controls. But he also initiated non-market-friendly but potentially vote-winning populist measures including cutting taxes on food and awarding bonuses to state workers.
In the run-up to Sunday's vote, his re-election campaign has doubled down on right-leaning discourse designed to remind voters of the hit Argentina's economy took when his less market-friendly predecessor was in charge.
"Let's not return to the past," Macri has said repeatedly during campaign stops.
Meanwhile Fernandez, who occupied a key role in the government of deceased former leftist president Nestor Kirchner - but who is considered more centrist than his running mate, who is Nestor's widow - has promised to tackle poverty and stimulate small businesses.
Fernandez has also vowed to push back against the International Monetary Fund (IMF), with which Macri negotiated a $57bn bailout deal. Many Argentines bitterly resent the IMF for demanding painful belt-tightening in return for rescue packages.
"Argentines do not have to be nervous," Fernandez said in a recent radio interview. "I ask you to be confident because those who created this disaster are leaving." 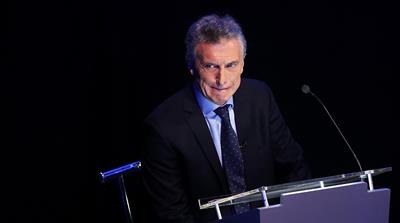 The campaign of Argentina's incumbent President Mauricio Macri has doubled down on discourse designed to remind voters of the hit Argentina's economy took when his less market-friendly predecessor was in charge [File: Agustin Marcarian/Reuters]
The number of publicised political polls dropped significantly after the vast majority of them failed to accurately predict the Fernandez landslide. Among the polling firms that came close, though, was Gustavo Cordoba & Associates.
Its director of investigations, Ana Paola Zuban, predicts Fernandez will win on Sunday by a wide margin, but says that any honeymoon period he may enjoy is likely to be short-lived.
"There is an overexpectation of Fernandez, and there is also less patience, in terms of time allowed to resolve problems that are very worrisome," she said. "He won't be able to resolve the crisis from one day to the next."
With victory in sight, Fernandez is appealing to those voters who do not support him, among them swaths of Argentina's powerful agricultural sector, which sparred with Cristina Fernandez de Kirchner's government over proposed tariffs that never came to fruition. That clash led Alberto Fernandez to part ways with Fernandez de Kirchner back in 2008.

We need to have long-term policies, which sometimes seems like an impossible feat in our country.
NESTOR CESTARI, CAMARA ARGENTINA DE FABRICANTES DE MAQUINARIA AGRICOLA

What voters are saying

Many farmers, and organisations that represent them, have come out strongly in favour Macri and are organising caravans to show their support.
Nestor Cestari, the head of the Camara Argentina de Fabricantes de Maquinaria Agricola, which represents manufacturers of farming equipment, says a stable, business-friendly climate is essential to the sector's wellbeing.
"We need to have long-term policies, which sometimes seems like an impossible feat in our country," he told Al Jazeera.
Gonzalo Rodriguez, who has a family-run business selling wholesale produce in Buenos Aires's central market, said that despite the financial hardships the country is experiencing under Macri's presidency, he still prefers it to the Kirchner years. 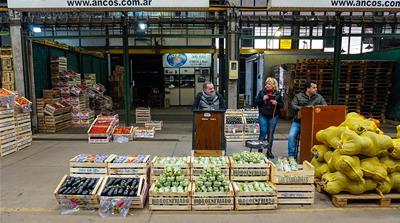 Macri supporter Gonzalo Rodriguez, far right, and his father, Jorge Rodriguez, wait for customers at the Central Market, in Buenos Aires [File: Natalie Alcoba/Al Jazeera]
"No government has benefitted us, but what we did see is that Macri's government tried to straighten out all those bad things and corruption and deals that the previous government made," Rodriguez told Al Jazeera.
For Raquel Vivanco, president of the Ahora Que Si Nos Ven (Now They See Us) observatory, which tracks femicides in Argentina, a new government represents a chance to make important gains for women.
She's hoping a Fernandez-Fernandez de Kirchner ticket carries the election and follows through on its promise to create a Ministry of Women, Diversity and Equality to empower women economically.
"We have the expectation that this new government, even though it's assuming power in a complex economic context, will be able to move forward economic policies that incorporate this perspective of the rights of women, and diverse identities, in a way that is broad and deep," Vivanco told Al Jazeera.
"We're saying goodbye to a government that has adopted neoliberal policies of cutbacks."
Business Politics