Shots fired in Lebanon's Tripoli as army clashes with protesters 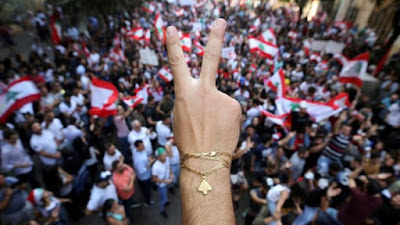 Beirut, Lebanon - Several people have been wounded in clashes with the army near the northern city of Tripoli on the 10th day of largely peaceful anti-government protests in Lebanon.


Video from Tripoli's Beddawi area posted on social media on Saturday appeared to show protesters standing in a street about 100 metres from soldiers as shots ring out, after which a man can be seen being carried away.
The Lebanese Red Cross said on Twitter that three wounded people were taken to hospital, without providing further details.
"We were sitting peacefully in the road, blocking it like is happening in all Lebanese areas, and then they started shooting," a female protester told local news channel LBCI, holding several empty bullet casings in her hand. A number of protesters similarly held spent casings in their hands.
Lebanon's army said in a statement that it intervened in a clash between protesters and citizens who were trying to drive through the blocked road, at which point stones and fireworks were thrown at them.
The army was then "forced to fire in the air", and also used tear gas and rubber bullets, injuring a number of people, the statement said.
The army said it brought in reinforcements and launched an investigation into the matter, adding that five soldiers were injured in the clashes. Calm was restored in the Beddawi area by nightfall.
The incident occurred after a high-level meeting of the country's top security branches was held earlier at the Lebanese Army's headquarters in an attempt to agree a plan to reopen the country's roads, many of which have been blocked by protesters since a largely peaceful nationwide uprising began on October 17.
Demonstrators who first took to the streets to oppose new taxes are calling for the resignation of the government and for politicians who have ruled the country since its 1975-90 civil war to be held accountable for decades of corruption.
Prime Minister Saad Hariri has responded by cancelling proposals for new taxes and promising support for low-income families, while President Michel Aoun asked protesters to select representatives with whom a dialogue can be held.
Aoun, Hariri and Hezbollah leader Hasan Nasrallah have also all called for roads to be reopened.
Saturday's security meeting to that end brought together the Lebanese Army Commander Joseph Aoun and the heads of Lebanon's three other major security services, The Internal Security Forces, General Security and State Security.

In the capital Beirut, security forces attempted to clear vital roads throughout Saturday, including a ring-road connecting east and west Beirut and a crossing on the capital's outskirts through which traffic passes to the mountains behind the city, known as the "Chevrolet crossing".
In a game of cat-and-mouse, protesters were pushed from one road, blocked another, and then headed back to the roads from which they were removed earlier.
Shortly thereafter, that group of protesters ran towards the ring road and blocked it."We will close the ring road, we will close the banks street, we will close [the street] in front of the [Central] Bank, we will close all of Lebanon," a protester blocking a main road in downtown Beirut shouted.
As of 6:30pm local time (15:30 GMT), hundreds of protesters held both the ring road and the Chevrolet crossing, in addition to the downtown Beirut area which was filled with tens of thousands of demonstrators.
Protesters continued to hold several areas along the main north-south highway, including in Jal el-Dib, Zouk Mosbeh and Jbeil north of Beirut, and in Jiyyeh south of Beirut, while others occupied squares and roads the eastern Bekaa region, as well as in Sidon and Tyre in south Lebanon.
News