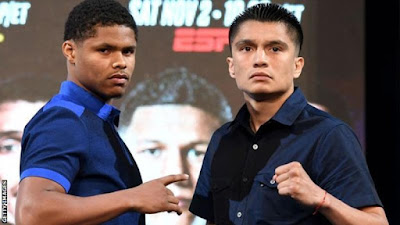 The 22-year-old inflicted a first defeat on his compatriot, taking the vacant WBO world title.
Stevenson is dating 26-year-old Gonzalez's sister Jajaira, who is estranged from her family as a result.


Gonzalez rejected Stevenson's attempt to make peace with his family in the ring after the bout.
"I have nothing but respect for Joet. It was personal for him but business for me," Stevenson said.
"I told him he is a hell of a fighter, but he didn't want to talk to me."
All three judges scored the fight overwhelmingly in favour of unbeaten Stevenson, each scorecard reading 119-109.
The two fighters were kept apart after the final bell, with the bad blood between the two corners spilling out into the ring, as Gonzalez said "it was personal".
"It was between me and him, the disrespect he was putting out, he said a lot of things," said Gonzalez, who now has a 23-1 record.
"I don't know how he can say he has no hard feelings when the whole time he was disrespecting our family."
Stevenson, who won silver at the Rio Olympics, is the first boxer from that 2016 US team to win a major title, in his 13th professional bout.
He now hopes to fight Leeds' Josh Warrington, the IBF champion. On Saturday Stevenson wrote on Twitter: "Are you ready to unify cause I sure am?"
Sports