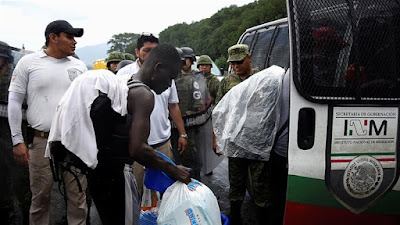 Tapachula, Mexico - Immigrant rights groups are raising alarm over the recent detention of hundreds of migrants and documented asylum seekers in southern Mexico, calling it an "outright war on migrants" and a "cruel and inhumane hunt".


Hundreds of migrants travelling in a US-bound caravan in the southern state of Chiapas, as well as others in the region, were detained on Saturday, despite many carrying official Mexican government documents that grant them the right to be in the state.
Mexican advocates and activists held a protest against the crackdown on Thursday in Mexico City, declaring "we are not the wall".
"It is an outright war on migrants," said Luis Garcia, a lawyer working with the Center for Human Dignity, a migrant and inmate rights group in Tapachula, Chiapas.
Many of the detentions came after National Guard troops blocked a key highway 30km (18 miles) north of Tapachula, and stopped the caravan, which included more than 1,000 African, Afro-Caribbean and Central American migrants. Detainees were taken to the Siglo XXI immigration detention centre in Tapachula.
"They are treating migrants as enemies instead of as clients," said Garcia. 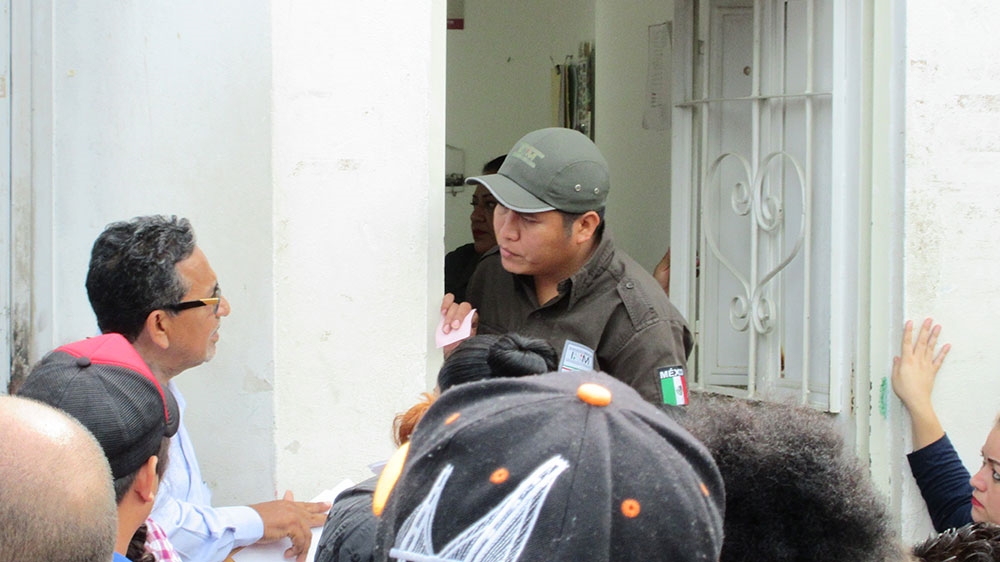 Migrant rights lawyer Luis Garcia, left, speaks with an official at an immigration office in Tapachula on behalf of a group of migrants and asylum seekers [Sandra Cuffe/Al Jazeera]
Garcia witnessed the crackdown on the caravan and said he has documented at least 613 detentions, but believes the actual number to be much higher.
"It is a complete abuse of authority. Most of the people detained have authorisation documents from [the Mexican Refugee Assistance Commission, COMAR] that permit them to be anywhere in Chiapas," he said.
Overcrowded, unsanitaryGarcia said he is preparing to file a formal complaint with the prosecutor's office on behalf of documented asylum applicants who were detained. Dozens of people have already signed onto the complaint, and the list is growing.
Al Jazeera spoke to five Central American migrants who were detained on Saturday morning in Viva Mexico, 7km (four miles) outside of Tapachula. They were all carrying their COMAR documents.
They told Al Jazeera they were told they were being taken to a checkpoint to verify their documents, but were taken instead to the Siglo XXI detention centre and held for between 20 and 30 hours.
Gisela Villatoro, her husband and their two-year-old and nine-month-old children were among the group. The family left their home in Honduras in June, fleeing violence and threats from gangs.
"They grabbed me by the arm," Villatoro told Al Jazeera.
"An immigration agent yelled at me. But I could not get into the [immigration detention van] quickly because I was carrying my baby," she said.
Villatoro said guards in the detention centre insulted, ridiculed and pushed migrants. She also said that there was inadequate access to food and water, and that her two-year-old became sick with a fever, vomiting and diarrhoea.
Villatoro's husband, Victor Cruz, said the men's section was overcrowded, with migrants filling the hallway and barely had enough room to lie down to sleep. Cruz estimated more than 2,000 people were in custody by Saturday night in Siglo XXI, which has a capacity for just under 1,000.
An injured man who was detained and did not know where his wife and children were made repeated desperate pleas for a phone call to try to verify their safety, according to since-released detainees. He later removed the gauze from his injured hand and fashioned and hung a noose before other detained men stopped him and got him down, according to Cruz and other witnesses.
"It is thanks to that son of a b***** that you are getting out," a guard told Villatoro when she was released Sunday morning along with seven other women and their children, she said.
Cruz and several other men were released by Sunday afternoon, although one Honduran detained with them who was also carrying COMAR documentation was not released until Tuesday evening, according to his Mexican partner and the Central Americans. Other detainees remained in custody, according to the released detainees and advocates.
A Mexican government source who did not wish to be named because the individual is not an official spokesperson, told Al Jazeera that approximately 300 caravan migrants were invited to board immigration institute vehicles to facilities in Tapachula, and that they did not have knowledge of others taken into custody Saturday in the area.Detainees without official documentation permitting their presence in the state of Chiapas may face prolonged detention, be subject to deportation proceedings or pursue an asylum claim once in custody.
The source said at least half had the required documentation, and initially said they were released immediately. But after questioned about documented asylum seekers being held for one or more nights, the source said that once in custody, migrants' paperwork is verified one at a time with COMAR and other government entities - a process that is time consuming. Unlike police, immigration agents are not authorised to detain people, the source said, emphasising that the terminology used is not detainees but "presentados" - people presented to immigration authorities.
Food and other needs are provided, and personnel from official human rights commissions regularly visit immigration facilities to monitor conditions, according to the source. To their knowledge, there is no record or information concerning a suicide attempt over the weekend in Siglo XXI, the source said. 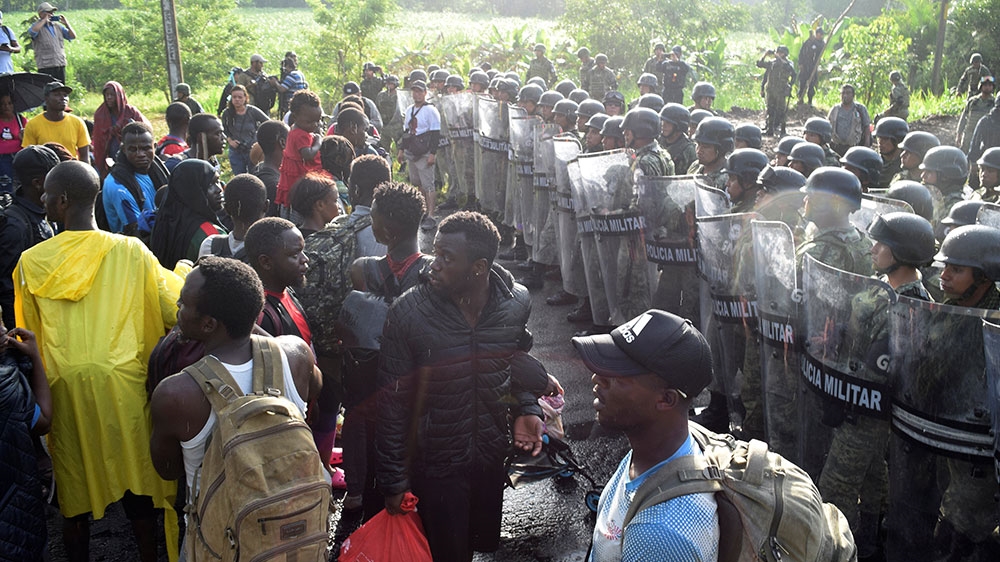 Members of the National Guard block a road during an operation to halt a caravan of migrants and asylum seekers from Africa, the Caribbean and Central America, hours after they embarked towards the US [Jose Torres/Reuters]
The Central Americans reported abusive treatment inside Siglo XXI but said African, Haitian, Garifuna and other black migrants and asylum seekers were subject to greater discrimination, worse treatment, and extended detention.
"We are being treated like animals," Kama*, an asylum-seeking migrant from the Democratic Republic of the Congo living in a pan-African protest camp outside Siglo XXI, told Al Jazeera.
For more than a month, African migrants have held protests outside Siglo XXI and marches in Tapachula, calling for authorisation to transit through Mexico to seek asylum in the United States or Canada.
Mexican immigration officials used to issue African and some other US-bound migrants with temporary transit permits that allowed them to travel north to the US border. But in recent months, the documents restrict travel to the state of Chiapas, only permitting exit from Mexico via its southern border with Guatemala, prompting the protests. Initial COMAR documents issued in Chiapas also restrict travel to the state.
"We want the government to treat us as human beings," Ze*, an Angolan migrant who hopes to seek asylum in the US, told Al Jazeera.'

The detentions come as Mexico continues to ramp up its efforts to stem the flow of migrants travelling through Mexico towards the US border.
US President Donald Trump has made hardline immigration policies central to his presidency, putting pressure on Mexico and Central American governments to stem the flow of migrants and asylum seekers to the US.Migrants have told Al Jazeera they are fleeing violence, political persecution, and extreme poverty. Many hope to make it to the US southern border to seek asylum.
After Trump threatened to impose tariffs earlier this year, Mexico deployed thousands of troops from the incipient National Guard to southern border regions and stopped issuing northbound temporary transit permits in Chiapas.Rights groups say Mexico is doing too much to placate Trump and that the Mexican government has adopted similar "racist" policies.
"This policy of helping Donald Trump is a criminal policy," Garcia told Al Jazeera outside an immigration office in Tapachula, where he was providing legal counsel to migrants and asylum seekers.
"It is increasingly intensifying," he said. "We do not know how far it will go."
*Names have been changed to protect the individuals' identities.
News