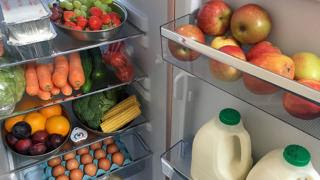 The Reach2 trust is going to put "community fridges" in its schools to provide food for families who otherwise would not be able to afford it.


The project is being launched in five schools in the east of England, with the aim of expanding to all of the trust's 60 primary schools.
Trust chief Sir Steve Lancashire says it's "heartbreaking" that it is needed.
"We often hear about children going to school hungry because their families simply cannot afford to provide them with the food that they would want to," says Sir Steve, Reach2's chief executive.

"To think that this is happening in 2019 is heartbreaking," said Sir Steve.
He says the problem is "very widespread" in the deprived areas where many of the trust's schools are located.
"The demands on families are rising, but wages are low, work can be hard to come by - and life is complex," says Sir Steve.
There have been growing numbers of schools providing food to parents in need - with the National Governance Association reporting last month that 8% of governors were in schools which were operating food banks.
This latest project will see the biggest academy group in the primary sector offering free food in its schools, using fridges donated by the manufacturer Amica.
The food will include surplus school meals and food approaching its use-by date, such as fruit, cheese, eggs, vegetables and yoghurts.
"Every week school kitchens have to discard food," says Sir Steve. But he hopes the community fridges will put the food to better use in tackling "family hunger".
It will begin next week with Reach2's primary schools in Colchester and Clacton in Essex and Ipswich, Beccles and Lowestoft in Suffolk.

Food banks usually provide supplies to people who have referrals from social services, GPs or schools.
But the community fridges in school will be available to any parents who need to take food - and will be "discreetly placed to avoid any stigma".
Sir Steve says he does not expect parents to abuse the offer - but says he would rather see a few people wrongly getting free food than see families going hungry.
"Parents are genuinely on the breadline," he says.
Unity primary academy, near Colchester, is one of the schools piloting the food scheme - and its co-head Lucy Williams says it is a response to a daily problem.
"More and more people are relying on food banks," she says.

Those needing help can include families where both parents are working, she says, with families struggling with low wages and high living costs.
Such working families and those on benefits can end up with "very little left over at the end of the month", says Miss Williams.
It might be a case of having to decide whether to pay for electricity or food, she says.
When children come to school without having eaten, she says, it affects their behaviour, "making terrible decisions and not able to focus".
She says teachers can hear from children themselves about anxieties over a lack of food.
For anyone doubting that children really are not being fed, she says: "Come and spend a day at school. There could be different reasons for hunger, but many people face challenges that put a strain on what's available at home."
The community fridges project, she hopes, will mean that "families won't have to worry about hunger".
Edu