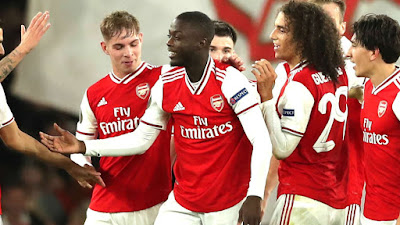 Arsenal manager Unai Emery has described Nicolas Pepe's effort in the Gunners 3-2 comeback victory over Vitoria Guimaraes in the Europa League as "perfect".


Defeat was staring the North London club in the face after their Portuguese opponents led 2-1 at half-time.
Pepe was then brought on with 15 minutes left to play, and scored two stunning free-kicks at the death to take all the three points and maintain Arsenal’s spotless run in Europe's second tier this season.
“We are very happy for him and for us because those two goals, from two set-pieces, were perfect,” Emery said after the match.
“He was trying a lot of set-piece shooting on the training ground last week and I was watching his shooting.
“The most important thing is the three points and that some individual players can improve, that they can take confidence for us and for them.
“Every player, usually, they need time to adapt. Pepe is a very good player and we believe in him, totally.
“The way he’s going, sometimes he feels better, sometimes it’s with more difficulty on the pitch.
Article continues below
“He’s improving and tonight those two goals are really important for us first, and then secondly for him. He’s continuing the adaptation in his process and as soon as he can adapt, that’s better for us.”
The result is a morale boost for Arsenal, who were beaten by Sheffield United in the Premier League on Monday.
Their next assignment is a Premier League clash with fellow Londoners Crystal Palace on Sunday afternoon.
Sports