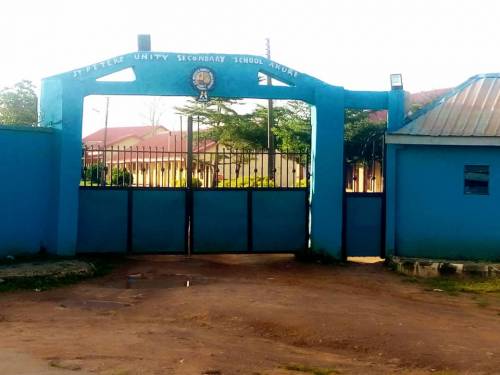 An outbreak of a disease has left one student dead at the St. Peters Unity Secondary School, Akure, the Ondo State capital.


Two other students in the Junior class [JSS1] in the same school were also hospitalized and "isolated" in the children's ward of the Ondo State Specialist Hospital Akure.
SaharaReporters gathered that the ailment, suspected to be bacterial meningitis, must have been caused by the unhygienic condition of the school's kitchen and its environment.
It was observed that the school authorities have placed visitors to the school under tight security watch.
Impeccable sources confirmed the outbreak of the disease to SaharaReporters on Thursday morning.
One of the sources, who asked not to be named, revealed how the students were rushed to the hospital, saying, "The school rushed two of the students to the hospital last week because they showed symptoms of an illness.
"On Saturday, one the students died while nurses were trying to attend to him and this causesd a lot of panicking. Another female student of the school was rushed to the hospital showing the same symptoms like the other students.
"So, the state hospital decided to take precautions and isolate them in the children ward while restricting every visitation."

St Peters Unity Secondary School Akure, and the Children's Ward where the students were being treated and isolated.
A parent of one of the hospitalized students told SaharaReporters that the hospital had not briefed him about the illness of his son.
"I was called five days ago that my child, who recently gained admission into St. Peter's Akure, was rushed to the state hospital after he fell sick.
"I got to the hospital, and I saw my son lying sick on the bed and could not talk while his eyes look bluish with some nurses attending to him.
"Since then, the nurses set him and one other student aside in the hospital as they restricted our movement to him," he said.
The Ondo State Commissioner for Health, Wahab Adegbenro, confirmed the situation, noting that health practitioners have already been sent to the school.
"The ministry just got to know about it (the outbreak) and we have taken measures to prevent and ensure it doesn't spread to others.
"We have taken blood samples for diagnosis to confirm the type of disease it might be. We really have to be sure about the type of disease.
"We have also isolated two of the students affected at the wards and they have also been placed under control and they would soon recover.
"I can say there is no cause for alarm or panic as we have risen up to the challenge. As I speak, we have visited the school to ensure we fumigate everywhere in the dormitory and treated other students.
"While the students who might have got in close contact with the ones hospitalized have been placed on medications to avoid the spread of the ailment."
Health