Ministers resign after third day of protests in Lebanon 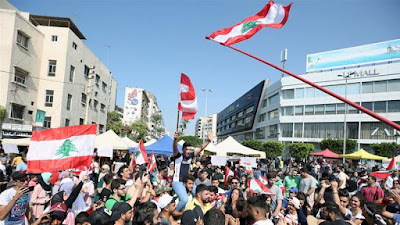 A Lebanese Christian party has announced it is quitting the government after a third day of protests across the country against tax increases and alleged official corruption.


After tens of thousands took to the streets on Saturday, four ministers from the Lebanese Forces party, a traditional ally of Prime Minister Saad Hariri, resigned from his cabinet.
"We are convinced that the government is unable to take the necessary steps to save the situation", said Samir Geagea, head of the party.
Hariri has given his deeply divided coalition until Monday evening to commit to a reform package aimed at shoring up the government's finances and securing the disbursement of desperately needed economic assistance from donors.
Protesters in Beirut’s Riad al-Solh square, a stone's throw away from the seat of government, celebrated as news of the resignations broke.
But they quickly began chanting to demand further resignations, using a slogan conventionally chanted at football matches: "The first shot went in, where is the second?"
Labour Minister Camille Abousleiman, one of the four to quit the government, told Al Jazeera shortly after the decision that they had "lost faith in the government’s ability to effect change and address the problem".
Earlier on Saturday in central Beirut, the mood was fiery and festive, with protesters of all ages waving flags and chanting for revolution outside upmarket retailers and banks that had their storefronts smashed in by rioters the night before.
The number of protesters grew steadily throughout the day, with major demonstrations in the country's second-biggest city, Tripoli, in the north, and other locations.
Many waved billowing Lebanese flags and insisted the protests should remain peaceful and non-sectarian.

The demonstrators are demanding a sweeping overhaul of Lebanon's political system, citing grievances ranging from austerity measures to poor infrastructure.
"This country is moving towards total collapse. This regime has failed to lead Lebanon and it must be toppled and replaced," Mohammad Awada, 32, who is unemployed, said.
The latest unrest was sparked by anger over the rising cost of living and new tax plans, including a fee on WhatsApp calls, which was quickly retracted after protests - the biggest in decades - broke out.
In an attempt to appease demonstrators, Lebanon's finance minister announced following a meeting with Hariri that they had agreed on a final budget that did not include any additional taxes or fees.
Lebanese President Michel Aoun said in a tweet there would be a "reassuring solution" to the economic crisis.
The protests followed a build-up in grievances over perceived government corruption, mismanagement of funds and a failure to address high unemployment.

In a televised speech addressing the protests on Saturday, Hezbollah leader Hassan Nasrallah said the group was against the government resigning, and the country did not have enough time for such a move given the acute financial crisis.
"Everyone should take responsibility rather than being preoccupied with settling political scores while leaving the fate of the country unknown," he said.
"All of us have to shoulder the responsibility of the current situation that we arrived at," added Nasrallah, whose Iranian-backed Shia group is Lebanon's most influential.
The protests that have swept villages and towns across Lebanon recall the 2011 Arab revolts that toppled four presidents.
The Hezbollah leader said he recognised the protests were "honest and spontaneous" but warned that his heavily armed and powerful group, which backed the president's rise to power, would not permit his downfall.

In Tripoli, demonstrator Hoda Sayyur was unimpressed by the contrition some leaders displayed on television and echoed a widely-held hope that the entire political class be replaced.
"They took all our fundamental rights ... We are dying at hospital gates," the woman in her fifties said.
"I will stay in the street ... Since I was born, we've been spectators to their quarrels and corruption," she said.
Meanwhile on Saturday evening, thousands were again packed into the Riyadh al-Solh square in central Beirut, despite security forces using tear gas and water cannons to disperse similar crowds a day before.
The Internal Security Forces said 70 arrests were made Friday on accusations of theft and arson.
But all of those held at the main police barracks were released on Saturday, the National News Agency (NNA) said.
Lebanon has one of the highest public debt burdens in the world and the government is trying to reach agreement on a package of belt-tightening measures to cap the deficit in next year's budget.
The promised austerity moves are essential if Lebanon is to unlock $11bn in economic assistance pledged by international donors last year.
Growth has plummeted in recent years, with political deadlock compounded by the impact of eight years of war in neighbouring Syria.
Lebanon's public debt stands at around $86bn - more than 150 percent of gross domestic product, according to the finance ministry.
Politics