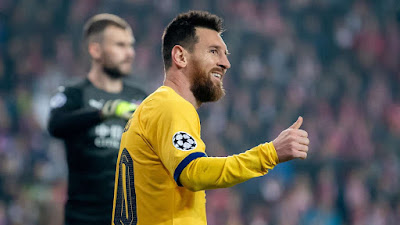 Lionel Messi broke one record on Wednesday with a goal against Slavia Praha while equalling two Real Madrid legends for another in the process.


Messi scored just three minutes into Wednesday's Champions League clash, marking his first goal of the European campaign.
The Argentine took advantage of a mistake from the opposition, as Barcelona forced a turnover with Arthur receiving the ball at the top of the box.
Arthur tapped a pass towards Messi, who finished with ease to give his side the early lead.
With that goal, Messi became the first player to score in 15 consecutive Champions League campaigns, dating back to the 2005-06 season.
That season, his first full campaign with the Barcelona first team, Messi scored a group-stage goal against Panathinaikos to kickstart what would be a historic Champions League run.
While Panathinaikos was Messi's first victim, Slavia Praha became the 33rd different team that Messi has scored against, tying him for another record.
Messi's goal tied him with former Real Madrid stars Raul and Cristiano Ronaldo for that mark, with the two also having scored against 33 different sides.
The three are, as expected, the top three goalscorers in Champions League history, with Ronaldo leading the way with 127 goals.
Messi sits second with 112 total goals, while Raul is in a distant third with 71 finishes.
On Tuesday, Messi saw one of his own records fall as Kylian Mbappe scored a hat-trick for Paris Saint-Germain to become the youngest player to score 15 goals in the Champions League.
Mbappe did so at 20 years and 306 days old, while Messi's 15th Champions League goal came when the attacker was already 21.
The Barcelona star's goal on Wednesday was his first Champions League finish and his third of the season, having scored twice in La Liga after the start of his season was impacted by injury issues.
Barcelona currently sit first in La Liga with 19 points from nine games, one point ahead of rivals Real Madrid.
In the Champions League, Barcelona have settled for a win and a draw to begin their European campaign.
Sports