Messi a man for all Champions League seasons - but will this really be Barcelona's? 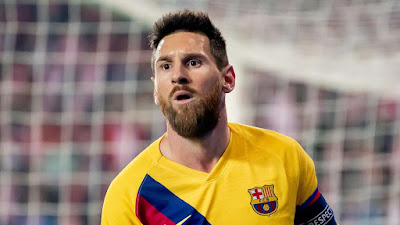 On Wednesday night, Lionel Messi lined up against Slavia Prague for the first time and it took him less than three minutes to add the Czech side to his list of Champions League victims in a scrappy and fortunate 2-1 win.


He's now scored against 33 different clubs – a feat only previously achieved by Raul and Cristiano Ronaldo.
With his characteristically cool side-footed finish, Messi also claimed one outright record: he is the first man to score in 15 consecutive Champions League seasons.
He's lifted the trophy four times. But that's one number he's not satisfied by.
We know that only too well. Messi doesn't say much to the press or the public, but when he does speak, he never hides his dissatisfaction with the fact that Barcelona haven't won the Champions League since 2015.
The Catalans have dominated La Liga over the last 10 years, winning eight titles since 2009, but 'just' three European Cups.
It's good but it's not enough, not when you have the greatest player in history at your disposal.
And especially not when your biggest rivals are out there winning three Champions Leagues in a row between 2016 and 2018.
Which is why European glory has become an obsession for Barcelona – and a burden, one they've repeatedly buckled under in recent seasons, with last year's capitulation at Anfield proving particularly hard to take.
So, will this season be any different?

The classy and industrious Frenkie de Jong has undoubtedly rejuvenated the midfield but the plan was for his former Ajax team-mate Matthijs de Ligt to do likewise at the back.
The centre-half never arrived, though, instead opting to join Juventus, and Barca are now arguably counting the cost of failing to inject new blood into the centre of their defence.
Gerard Pique and Co. came under intense pressure in Prague. They were breached just the once, when Jan Boril toe-poked home an equaliser early in the second half.
But, in truth, that was only because of the brilliance of Marc-Andre ter Stegen, who was once again sensational in goal – and, understandably, less than impressed with the antics of those meant to be protecting his goal.
"It is necessary for us to talk about some things," the German shot-stopper told Movistar Plus immediately after the game.
"We have to do so among ourselves. I will not say it here. It's an internal issue and I would like to first talk to those who were on the pitch."
Messi's contribution won't be questioned, of course. How could it? He has scored 19 Champions League goals since the start of the 2017-18 season. Barca's second-top scorer? Own goals, with seven! Barcelona's reliance on their captain has been clear for some time.
As well as opening the scoring in Prague from Arthur's slide-rule pass, Messi also whipped over the cross that resulted in the unlucky Peter Olayinka deflecting Luis Suarez's shot into his own net for what proved the game's winning goal.
The Uruguayan should also have converted a sublime through-ball from his Argentine accomplice but it must also be acknowledged that Messi blew a huge chance to spare Barca such a nervy finish and also botched a breakaway in the dying seconds with a loose pass.
This wasn't vintage Messi – which was hardly surprising given he is still working his way back to full fitness after an injury-interrupted start to the season – yet he was still their most decisive attacker.
This should be both a reassurance and a source of concern.
Messi is evidently a man for all seasons – but whether this will be Barca's remains to be seen.
Sports