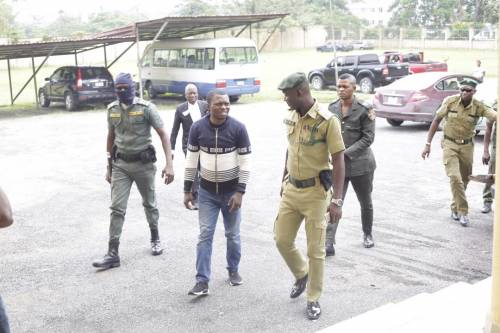 Justice Simon Amobeda of the Calabar Federal High Court has granted the prayer of the prosecution counsel to mask witnesses who will testify against Nigerian journalist, Agba Jalingo.


The judge posited that the order is in line with Section 33 and 34 of the terrorism prevention and amendment act 2013 as well as international conventions including those of the United Nations and African Commission of Human and People’s Rights among others to grant the plea of the prosecution.
The prosecution counsel, Dennis Tarhemba, had on October 11 filed a motion seeking the amendment of charges and protection of witnesses in order to protect them against attacks.
The motion was supported by an eight-paragraph affidavit deposed to by Inspector Ihezuo Ibe and accompanied by a written address.
During the hearing, the counsel to the defendant, James Ibor, submitted that “the defendant does not constitute a threat and faulted the application for the masking of the witnesses as there was no proper evidence as to when, where and how the witness was threatened".
He also said the person said to have carried out the threat was not named even as he posited that masking of the witness will not be in the interest of justice.
Delivering her ruling on the prayer, Justice Amobeda said, “The public and the press will not be allowed into the courtroom when the witness is testifying.”
The judge added, “The witness will testify behind curtains in a cubicle and to a camera. The defendant and his counsel will also not be privy to the name, alias or any other detail of the witness.”
News