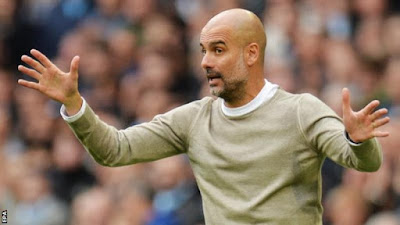 The Spaniard, keen not to make direct complaints on having to play two games in less than 48 hours, spoke metaphorically at his news conference.


"Go home, open the fridge and get inside for 48 hours," he said.
"See you at the Etihad Stadium in two days. I'm not joking."
Guardiola added: "When I open the fridge to make an omelette maybe I talk with my players then, but apart from that, no way."
City discovered on Thursday they will have to play two games in less than 48 hours following confirmation of the TV schedules.
They visit Wolves on 27 December (19:45 GMT) and entertain Sheffield United on 29 December (18:00).
City's Premier League title rivals Liverpool, who travel to Leicester on Boxing Day, have almost an extra day to prepare for their own game against Wolves, who must play twice in even less time than Guardiola's team.
Guardiola, whose side trail Liverpool by eight points after eight games and travel to Crystal Palace on Saturday, is refusing to complain about the situation.
While he clearly feels too much is being asked of his players, he thinks it would be counterproductive to make a fuss about the situation or allow himself to feel his club were being badly treated.
Overcoming adversity was the reason why City became the first team to complete a clean sweep of domestic trophies - including the Community Shield - last season.
"It's a business," he said. "The people do not care about the players. He's injured? OK, another one.
"We've solved it in the past and we'll solve it in the future. It's the only way. Don't complain or call my chairman or go to the big bosses.
"If we can't solve anything then we cannot win four titles in one season."
Sports