Man Utd winger James: I didn't get knocked out in Wales' draw with Croatia 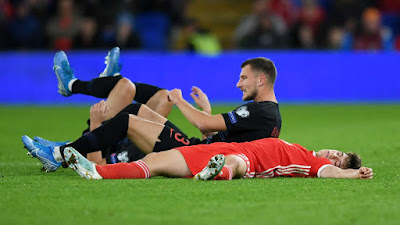 Manchester United winger Daniel James says he was not knocked out in Wales’ 1-1 Euro 2020 qualifying draw with Croatia on Sunday evening.


There was concern for the 21-year-old early on as he lay on the turf after receiving a blow to the head from Croatia defender Domagoj Vida, shortly after former Everton winger Nikola Vlasic had opened the scoring.
James got up and played on to full-time as Gareth Bale secured an impressive draw for Wales against last year’s World Cup finalists.
“[I’m] fine,” James told Sky Sports after the game. “He caught me in the head. I didn’t get knocked out.
“We knew it was going to be tough. It was a quick turnaround. We started well, although we conceded.
“To get the goal back showed character. There were a few tackles flying in but you expect that in these games.
“We've shown what a great team we are. It was about bouncing back.”

With images of James lying motionless on the pitch quickly circulating on social media, there was both concern for his welfare and disappointment that Wales manager Ryan Giggs opted not to take him off.
"Dan James went down and stayed down," Giggs said. "A bit of acting really. The medical staff went over. He was compos mentis. We did tests at half-time and he passed them. He's fine."
Head injuries have been under the spotlight in football as in other sports in recent years. UEFA’s most recent guidelines state that the match referee should stop the game for up to three minutes if concussion is a concern, allowing the player to be properly checked.
Their official protocol reads: "A player suffering a head injury that requires assessment for potential concussion will only be allowed to continue playing after the assessment, on specific confirmation by the team doctor to the referee of the player's fitness to do so."
The result means Wales still have a chance of qualifying for next summer’s European Championship, though they will require two of the teams above them to drop points in order to do so.
Croatia sit top of Group E with 14 points from seven games, with Hungary two points behind in second.
Slovakia and Wales each have two games remaining, with Slovakia on 10 points and Wales on eight. Wales’ final two qualifiers see them face bottom side Azerbaijan away from home and Hungary in Cardiff.
Sports