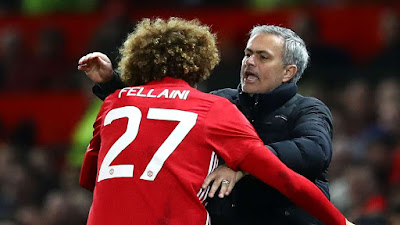 Marouane Fellaini has slammed the short-term vision at Manchester United, with the Belgian considering the club’s current struggles to be down to a lack of patience shown with proven managers.


Since Sir Alex Ferguson headed into retirement back in 2013, a club that enjoyed 27 years under one iconic coach has got through three permanent appointments in a turbulent period.
There are suggestions that Ole Gunnar Solskjaer, the man currently at the wheel, could make it four dismissals in the not too distant future.
Were he to be relieved of his duties, then the Norwegian will head the same way as David Moyes, Louis van Gaal and Jose Mourinho.
Fellaini worked under all of those bosses at Old Trafford and believes United are paying the price for being too trigger-happy.
A man who left Manchester for Chinese Super League side Shandong Luneng in February said in the Daily Mail: “They brought in Moyes, they didn't give him time. They brought in Van Gaal, they gave him two years and we started to do some things, he won the cup, but after that they sacked the manager because they want to win quickly.
“For me the club were too quick to sack Jose because a manager like that comes and he needs a lot of players to do his own philosophy.
“He wanted to build his team but after two years and a half they decided to sack him because the results were not there.
“That's the problem, they have to find a solution together. A manager like Van Gaal, tactically is very strong and a lot of experience and they sacked him.
“They brought in one of the best managers in the world in Jose Mourinho, he wanted to build a team and they sacked him.
“It's not easy to build a team in that time, you need more than two years.
“I don't know what they will do with Ole. Mourinho, for the first season, he did amazingly, he improved the team, won things.
“Okay the second season, was a bit more difficult, but he tried and did his best to help the team.”

Fellaini fears that a change in approach under Solskjaer has now left United with even more problems to contend with, as the club has shifted its focus from experienced stars to promising youngsters.
The Belgium international added: “Now you have a new manager, they wanted young players and that's what happens when you play with just young players - they will be up and down, up and down, that's football.
“Of course in football, you can't play with just young players, you need a mix. I think to win games, to win titles, to win big games you need experience. Of course you can win with young players but not every game.”
Fellaini, at 31 years of age, added experience to the Old Trafford ranks, but a seasoned performer was deemed surplus to requirements and is enjoying taking on a new challenge in Asia.
A man who faced criticism throughout his time with United, said of life in China: “It's different, it's a different atmosphere, the intensity is not the same, the crowd is not the same but it's a new challenge. It was the time for me to leave Europe, I wanted a new challenge and I'm very happy with that so I don't regret it at all.
“I played five-and-a-half years for Manchester. My first season was a transition, so I was in transition. I know I didn't have a great season. But after that I played my games, played well and I won things.
“Okay, I didn't win the Premier League but that's part of football. Manchester City was a strong team and was difficult to battle against them.
“But I did some great games, scored some important goals, so for me I was very happy with my time in Manchester.”
Sports