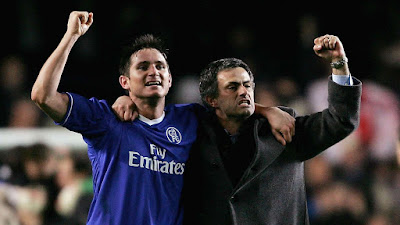 Frank Lampard has revealed that he keeps in contact with his former Chelsea manager Jose Mourinho, who "had a little go' at the Blues as a pundit following their 4-0 defeat to Manchester United on the opening weekend of the Premier League season.


The Blues, with a club legend in their managerial hot-seat, made the worst possible start to their domestic campaign in 2019-20.
A clinical display from the Red Devils at Old Trafford saw Chelsea sent back to west London with their tail between their legs, with Lampard given an early indicator of how tough life at the top can be.
Having spent much of his playing career at that level, the ex-England international is aware of the challenges he faces, and has tackled many of them head on to recover well from a slow start.
Lampard is also aware that criticism comes with the territory, as he is back under a top-flight spotlight, and appreciates constructive criticism from former bosses, family and friends.
He told talkSPORT of still being in contact with former Chelsea and United boss Mourinho: “With Jose, we would have texts from time to time. We had some at the start of the season around the Manchester United game, where he’d had a little go at us (Mourinho was a pundit for Sky Sports for that game), but it’s all good.
“I’ve sat in the punditry chair for a year so I understand the need to say things so I’m not going to bang on too much. In terms of him, we have a relationship.
“Harry Redknapp is Uncle Harry so it would sound wrong if I didn’t speak to him but he was great for me in getting me the role at Derby. He was close to Mel Morris.
“He followed us brilliantly last year. He would text me and call me to talk about Derby and is doing the same at Chelsea so I have to shout Harry even though he is family.
“What he did for me in terms of getting me on the ladder managerially is huge and I will always be thankful for that.
“I had really good relationships with my managers but sometimes in football, Guus Hiddink actually sent me some great messages, you move on a bit and it doesn’t become like you were more acquaintances but I have huge respect for all of them.”

Chelsea, despite working under a transfer ban, have won many admirers this season for their free-slowing football and faith in academy graduates.
Lampard is pleased to see his philosophy paying off, but acknowledges that he still has a long way to go.
He added: “I feel like we are moving in the right direction but I always get nervous saying it because it is a catalyst for overconfidence.
“The last month was good and we had some good results. The international break always worries you slightly because will we forget the good things we were doing that made us get good results and we can’t forget the fact we can do much more and we need to believe in ourselves that we can do much more.
“There’s a lot of work to be done and I don’t know what success looks like at the moment. It’s competitive at the top of the league and I don’t think the league has given itself and real form yet other than Liverpool who are deservedly right up there and City but the rest of us are trying to bridge that gap.”
Sports