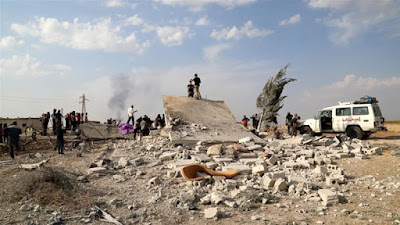 A senior Syrian Kurdish official has said his forces will pull back from a border area in accordance with a US-brokered deal after Turkey allows the evacuation of its remaining fighters and civilians from a besieged town in northeast Syria.


Redur Khalil, a senior official of the Kurdish-led Syrian Democratic Forces (SDF), said the plan for evacuation from the town of Ras al-Ain was set for Sunday if there were no delays.
The SDF largely consists of fighters from the Kurdish People's Protection Units (YPG), a group Ankara considers "terrorists" linked to Kurdish separatists on its soil.
A five-day ceasefire, reached in negotiations between Turkish President Recep Tayyip Erdogan and US Vice President Mike Pence, was largely holding along Turkey's border with Syria on Saturday, despite accusations of violations from Turkish-allied forces and Kurdish fighters.
According to the deal, Turkey agreed to give Kurdish forces 120 hours to pull back from the Turkey-Syria border to allow Ankara to form a so-called "safe zone". The agreement has not specified the area of its pullback.
Khalil, the SDF official, said his force would withdraw and move back 30 kilometres (19 miles) from the border after the planned evacuation.
He said only after that would his force pull back from a 120km (75-mile) area between the towns of Ras al-Ain and Tal Abyad.
This is the first time the Kurdish force has publicly acknowledged it will withdraw from the border, saying it has coordinated with the Americans.
Previous agreements between the US and Turkey over a "safe zone" along the Syria-Turkey border floundered over the diverging definitions of the area.
Khalil said a partial evacuation happened earlier on Saturday from Ras al-Ain after much stalling and with US coordination.

One Turkish soldier was killed and another wounded after an attack by the YPG group in northeast Syria's Tal Abyad, the defence ministry said in a statement on Sunday.
The ministry said the attack with anti-tank and light weapons struck Turkish soldiers carrying out a reconnaissance and surveillance mission in Tal Abyad.
It said the attack was retaliated, and added that Turkey remained committed to the truce deal despite the violations.
Turkey launched its cross-border offensive on October 9, aiming to clear the region of YPG fighters.
The campaign, dubbed Operation Peace Spring, would also allow the repatriation of Syrian refugees, according to Turkish officials.
However, there are fears the offensive may result in mass displacement of people and the revival of the Islamic State of Iraq and the Levant (ISIL, or ISIS) group.
On Saturday, Turkish President Recep Tayyip Erdogan said Turkey would press on with its offensive and "crush the heads" of Kurdish fighters if the deal on the withdrawal was not fully implemented.
"If it works, it works. If not, we will continue to crush the heads of the terrorists the minute the 120 hours [of the ceasefire] are over," Erdogan told supporters in the central Turkish province of Kayseri. 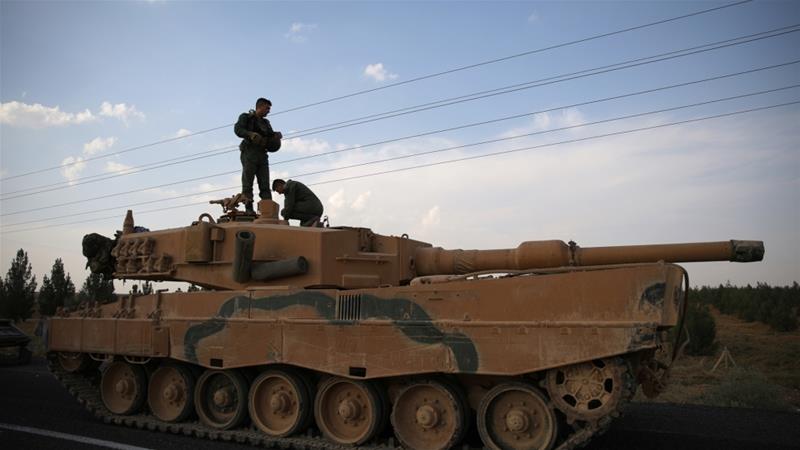 THE LISTENING POST
Turkey, Syria and the war that just gets tougher to report
News