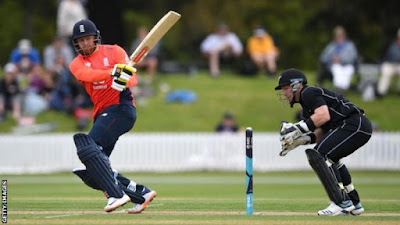 Opener Bairstow has been dropped from the Test portion of the tour which follows the T20 games, but saw his side home with 11 balls to spare in Lincoln.


The Kiwis had made 172-4 from their 20 overs following half-centuries by Anton Devcich (62) and Anaru Kitchen (50).
The T20 international series begins in Christchurch on Friday.
Yorkshire wicketkeeper-batsman Bairstow, who smashed six fours and four sixes, shared stands of 61 with Sam Billings (28) and and an unbroken 66 with Sam Curran (28 not out) as England won their first match under new head coach Chris Silverwood.
Bairstow, 30, said: "I'm on this tour to naturally score as many runs as possible, that's what's going to be the key to winning games of cricket.
"Selection is gone now, I've got some things to work on, I'm working very hard and I'm really enjoying that challenge."
England fielded uncapped batsman Tom Banton and pace bowlers Pat Brown and Saqib Mahmood, and it was a mixed day for the trio.
Lancashire's Mahmood took 0-35 from his four overs and dropped two catches in tricky windswept conditions at Bert Sutcliffe Oval, while Somerset opener Banton made 11, while Worcestershire's Brown (1-39) was expensive but took the wicket of Christian Leopard.
But Bairstow added: "In the conditions, running into the wind, it's a huge effort to be running in and trying to execute your skills the first time you've played for England, so I thought they did really well."
England play a New Zealand XI in a second warm-up game at the same ground on Tuesday.
Sports