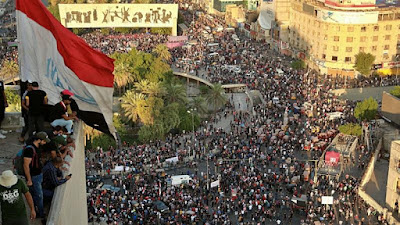 Hundreds of Iraqi protesters have remained in Baghdad's central Tahrir Square on Sunday, defying a bloody crackdown that killed at least 60 people over the weekend and an overnight raid by security forces seeking to disperse them.


Demonstrators continued to gather in the capital despite a rapidly rising death toll, with 63 killed according to a tally by the semi-official Iraq High Commission for Human Rights.
"We're here to bring down the whole government, to weed them all out!" one protester, with the Iraqi tricolour wrapped around his head, was quoted as saying by AFP news agency.
"We don't want a single one of them. Not [parliamentary speaker Mohammed] Halbousi, not [Prime Minister Adel] Abdul Mahdi. We want to bring down the regime," he added.
Students could also be seen joining demonstrations in Baghdad, with activists saying a dozen schools and universities had decided to shut their doors and take part in the protests en masse.
Young girls in school uniform and rucksacks were seen trekking through streets littered with tear gas canisters.
Iraq's elite counterterrorism service was deployed in Baghdad on Sunday to protect important state buildings.
The forces said in a statement the move was to "protect state buildings from undisciplined elements taking advances of security forces being busy with protecting protests and protesters".
Three protesters were killed when they were struck with tear gas canisters in Baghdad while another three were shot dead in the southern city of Nasiriyah after attacking a local official's home.On Saturday, security forces fired tear gas and opened live fire on thousands of protesters who tried to reach Baghdad's Green Zone, home to government offices and embassies.
The protests are a continuation of the economically driven demonstrations that began in early October and turned deadly as security forces began cracking down and using live ammunition. At least 190 people have since been killed.
The ongoing turmoil has broken nearly two years of relative stability in Iraq, which in recent years has endured an invasion by the United States and protracted fighting, including against the Islamic State of Iraq and the Levant (ISIL or ISIS) group.
The demonstrations have posed the biggest challenge yet to the year-old government of Prime Minister Abdul Mahdi, who has pledged to address demonstrators' grievances by reshuffling his cabinet and delivering a package of reforms.
Many view the political elite as subservient to one or other of Iraq's two main allies, the US and Iran - powers they believe are more concerned with wielding regional influence than ordinary Iraqis' needs.The moves have done little to quell the demonstrators, however, whose ire is focused not just on Mahdi's administration but also Iraq's wider political establishment, which they say has failed to improve the lives of the country's citizens.
Nearly three-fifths of Iraq's 40 million people live on less than six dollars a day, World Bank figures show, despite the country housing the world's fifth-largest proven reserves of oil.
News