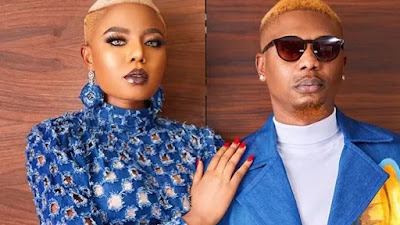 The 2019 Headies is currently taking place at the Eko Convention centre inside the Eko Hotel and Suites in Lagos.

A choreography group kicked off the performances for the night with the dancers all clad in white attire at exactly 10 PM. The performance is followed by another choreography with the members of the team dressed in black attires.
The choreography performance introduced the hosts of the night, Nancy Isime and Reminisce.
Paul Okoye of UpfrontandPersonal management was honoured with the Special Recognition award plaque.
Tacha dazzles guests as she joined ex-BBNaija housemate, Venita and producer, TY Mix to present an award at the 2019 Headies. [Instagram/symply_tacha]
Killertunes emerged the 'Producer of the year' for his production of 'Fake Love' featuring Starboy, Wizkid and Duncan Mighty.
Falz picks his third award for the night, joining Teni by winning the 'Album of the year' category.
Mayorkun joins Falz by winning his second award on the night for 'Hip Hop World Revelation'.
Clarence Peters wins the award for 'Best music video' for Burna Boy's 'Dangote'
Music break: Duncan Mighty performs some of his greatest hits.
Teni wins her third award for the night in the 'Headies Viewers Choice' category.
Mayorkun wins the award for the 'Best R&B Pop Album'.
Teni wins her second award on the night for the 'Best Pop single' category.
Music break: Style Plus comes on stage to perform some of their greatest hits.
Seyi Shay wins the award for 'Best R&B single' for her song, 'Gimme Love' featuring Runtown.
Yemi Alade wins the award for Best Performer.
Burna Boy and Zlatan Ibile wins the award for 'Best Collaboration'.
Music break: Victor AD takes on the stage with an interesting performance.
AQ wins the award for 'Lyricist on the roll'
Falz wins his second award for the night in the Best Rap Album category.
Johnny Drille wins the award for Best Alternative song with the song, 'Finding Efe'
Music break: Wurld performs to the guests and celebrities at the 13th edition of Headies.
Falz d bhad guy wins the award for Best rap single.
Teni da entertainer wins award for the Best recording of the year.
Wurld picks up the award for 'Best Vocal performance' male before Zaaki Azze showed up on stage for his performance.
Chinko Ekun wins the award for Best Street-Hop artiste.
Barry Jhay wins 'Rookie of the year' award and he goes down in history as the first artiste to receive his award at the 13th edition of the Headies.
Some of the early birds at the event include BBNaija host, Ebuka Obi Uchendu, BBNaija ex-housemates and winner, BamBam, Mike, Sir Dee, Avala, Tobi Bakre, Rico Swarvey, and Mercy. Other celebrities spotted at the event include Do2tun da energy god, Joeboy, Victor AD, Ubi Franklin, Eyinna Nwigwe, and Ruggedman.
Ubi Franklin, BBNaija stars, BamBam, Mercy and Mike [Instagram/ubifranklin]
The show is expected to kick off after the red carpet.
Dr Sid at the Headies 2019 [Instagram/drsid]
Actress and TV host, Nancy Isime and rap star, Reminisce are the host for the 13th edition of the Headies, which is formerly known as the Hip Hop World award.
Cool FM presenter, Do2tun at the 2019 Headies [Instagram/sugar weddings]
Alexander Forbes consulting is responsible for collating votes for the award categories that are open for voting.