Hazard left out of Real Madrid squad for trip to Mallorca 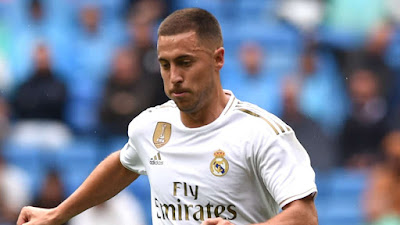 Eden Hazard has been left out of the Real Madrid squad for Saturday's La Liga clash against Mallorca.


The Spanish league leaders face an away trip to struggling Mallorca with an already depleted squad, with reports suggesting that the Belgian has been excused following the birth of his fourth child.
Gareth Bale, Toni Kroos Luca Modric and Lucas Vazquez had all been ruled out of the encounter by coach Zinedine Zidane, while Dani Carvajal has been rested.
Hazard was kept out of the first three league games of the season after completing a €100 million (£88m/$112m) move from Chelsea in the summer transfer window.
The Belgium international returned to action in mid-September and has since made six appearances in La Liga and the Champions League.
Hazard netted his first goal for Los Blancos two weeks ago when he struck against Granada, following that up with his first assist as Zidane's team won 4-2.
Mariano Diaz has taken the former Chelsea star's place in the squad, joining an attack that includes Karim Benzema, Luka Jovic, Vinicius Junior and Rodrygo, while Brahim Diaz has also been included.
Dominican Republic international Mariano has not featured for the capital club this season, as Zidane has preferred a front three of Benzema, Bale and Hazard.
Vinicius Jr appears likely to start in the absence of both Bale and Hazard, while there could also be a recall to the starting XI for James Rodriguez, who began as a substitute last time out.
There is some good news for Zidane, however, as he welcomes left-backs Marcelo and Ferland Mendy back into the squad.
Madrid are top of the Spanish top-flight after eight matches - a point ahead of Granada and two clear of main rivals Barcelona.
Los Blancos were due to face Ernesto Valverde's side on October 26 at Camp Nou, although the match has been postponed amid fears over security issues amid the Catalan protests in the city.
Sports