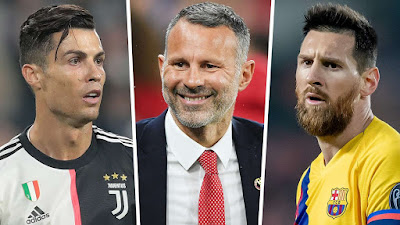 Ryan Giggs has given his verdict over who is better between Cristiano Ronaldo and Lionel Messi, insisting that while he would always back his former team-mate, the Barcelona star is a "once-in-a-lifetime" player.


Widely considered to be two of the best players ever, Messi and Ronaldo have long divided opinion over who is the greatest, with both having scored over 600 goals each and having collected 10 Ballon d'Or awards between them.
And Giggs, who played alongside Ronaldo during the Portugal captain's time at Manchester United, insists that while he will always speak highly of the 34-year-old, Messi has proved to be a "genius" with his displays over the years.
He told DAZN: "Obviously I lean towards Ronaldo a little bit because I played with him and saw him develop as a player. But Messi is a genius, he's a once in a lifetime player. It's as simple as that."
Now manager of the Wales national team, Giggs will have been keeping a close eye on developments in La Liga and at Real Madrid, with Gareth Bale on the books at the Bernabeu.
The former Tottenham winger had appeared certain to leave the Spanish capital in the summer, with Zinedine Zidane having been keen to move him on, but he ultimately remained a Madrid player.
Indeed, Zidane cooled his stance over the Welshman and his future following a serious injury sustained by Marco Asensio, with Bale subsequently having featured in seven matches for Los Blancos so far this season.
His progress had been curtailed somewhat by a calf injury sustained on international duty, although Madrid have remained quiet over the severity of the problem, with Bale having been left out of the last two matchday squads.
Article continues below
And Giggs admits he has found it strange following his star man's situation at Madrid, pointing to the fact he's won four Champions League titles with the club and that he continues to have the ability to change a game in an instant.
He said: "It's strange. From the outside, it looks strange. For the quality he possesses and what he's won there: four Champions Leagues.
"I'm his coach for Wales, he's recently been my captain, and is a good professional. He's a player that can turn a game on its head like he did against Liverpool for Madrid."
Sports