Franklin Ugobude: Nigerian Politics is the Casualty of Omoni Oboli’s ‘Love Is War’ 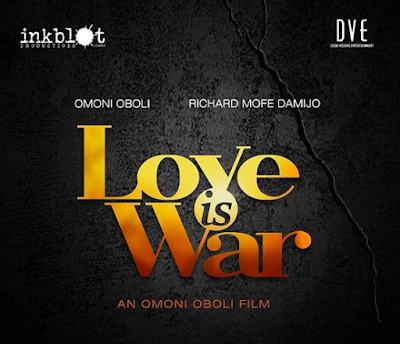 War seems to be a phenomenon that Omoni Oboli is fascinated with, or is just used to. Last year, she directed ‘Moms At War,’ where she played Ebubechukwu and was in direct competition against another mom, Olaide (Funke Akindele) for the success of their respective kids
. This time around, she stars as Hankuri Phillips, a former minister who fights to become Nigeria’s first female governor. Unlike Moms At War where the enemy is an outsider, Oboli’s Hankuri, an accomplished woman in Love Is War goes against her husband, Dimeji Philips (Richard Mofe-Damijo), for the Ondo state gubernatorial seat. Jay-Z says in his 2017 hit that ‘Nobody wins when the family feuds’ and that is true for most of Love is War.

As you may have probably guessed, ‘Love Is War’ revolves around the husband and wife duo of Dimeji and Hankuri. Hankuri has been appointed by the president to be the party’s flagbearer for the gubernatorial elections. However, she is not the preferred choice of the state party’s leadership because she is a woman and only affiliated to the state through her marriage to Dimeji.
Her husband, on the other hand, is a medical doctor with a rich family legacy who is ever supportive of his wife’s ambition and is ready to assume his position as the first gentleman. This perfect union slowly and steadily hits the rocks after mischievous politicking by Hankuri’s detractors’ forces Dimeji to join the gubernatorial race as the flagbearer of an opposition party. This automatically places him as his wife’s direct opponent. His motive for joining the race is ridiculous, but it’s the only reason the audience gets a war.
Love Is War significantly offers the audience a glimpse into how elections play out in Nigeria. It comes well recommended with the standard recipe: a little ass-kissing here and there, a few white lies to get ahead, too much money being spent, a sprinkle of blackmail every now and then, a lot of violence, cross-carpeting and egos being crushed everywhere. Hankuri, who sets out to run a clean campaign, will soon realize that it is inevitable for her to colour outside the lines sometimes if the plan is to win.
She would have to kneel to greet the governor because she requires his endorsement, take campaign donations in exchange for future favours, manipulate her own husband in full public glare, make outlandish promises during the debates, and accept in her cabinet people she wouldn’t invite to dinner.
Love Is War also doesn’t shy away from impressing its feminist leanings on the audience. It rides off the wave of Hankuri being as ambitious as she wants to be, despite naysayers who had expected her to step down and support her husband in his bid. In a way as well, it takes us through the journey of what ambitious women – and women generally – have to go through, pressing that message home with a harrowing rape story. This topic is very important at times like this when the #SexForGrades conversation is going on and harassment within workspaces is a recurring topic.
Despite its bright patches, Love Is War is not entirely flawless. Most notably, Hankuri Philips who is supposed to be a former minister seems pretty clueless about how politics works a lot of times. While Oboli was not exactly half bad at navigating the murky waters of Nigerian politics as Hankuri, it would have been interesting to see a more brazen personality take on that role. Love Is War makes up for some of its missteps with bright performances from Yemi Blaq, Shaffy Bello, Akin Lewis, Uzo Osimkpa and Jide Kosoko, who shine so bright in their scenes. The shots in the movie are some of the best you’ll ever see in a Nigerian movie this year and cinematographer Adekunle ‘Nodash’ Adejuyigbe, is to thank for that.
To its credit, Love Is War tells a compelling story about family drama and weaves it around the inner workings and madness of Nigerian politics in such a way that viewers can easily relate to real events. Family eventually wins when the end credits roll on Love Is War, but Nigerian politics is left with a battered image.
Features