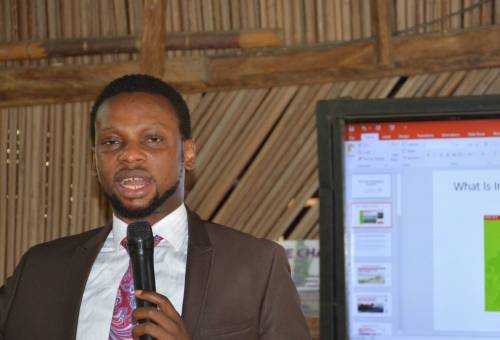 One patriotic citizen risked his life to track, excavate and exposethe stenchy corpse of corruption in Nigeria’s criminal justice systembut no sooner than his findings made it into the precinct of the mediadid reports claim that the cabals involved in the criminal justicesystem went hunting and planning to apprehend this journalist whoexposed corruption.
The actions of the authorities calcify my beliefthat perhaps even the individuals responsible for administeringjustice need to be brought to justice.Fisayo Soyombo is one man that has evinced his love and admiration forhis fatherland by placing his freedom on a thin line so as to combatcorruption. The power of one man intoxicated with the determination toincite a positive change cannot be overemphasized. Fredrick Nwabufo,SaharaReporters opinion writer, scribbling along this line, putsuccinctly in one of his articles: “One man can induce rippling changein a system. One man can stop illegal detention, arrests, and governthe impulse to clamp down on free speech and citizens’ rights. One mancan rebuild relationships and cause harmony to exist among disparatepeoples.”One man has chosen to reveal the hidden acts of darkness and that oneman is on the run for his dear life. What then is the incentive forspeaking the truth is a country that supposedly claims to ensure andguarantee freedom of speech?It becomes mind-boggling and very worrying that instead ofinvestigating the police over alleged abuse of their prosecutorialpowers, the authorities irked by the report of this passionatejournalist went haywire and is keen on throwing this truth talker intothe gulag. What shall we say is Fisayo's crime? Exposing corruption?Isn’t it stipulated in the national anthem that every Nigerian shouldendeavour and strive to “serve Nigeria with all my heart “? Shouldn’tthis journalist be venerated and appreciated for choosing to go extramiles in performing a great service to the nation?The Nigerian police cannot deny that its officers have time withoutnumber carried out extrajudicial killings, extortion, and haveharassed innocent Nigerians. Reports have shown that some bad eggs inthe system are prone to be trigger-happy when confronted by Nigerianswho would not agree to pay bribes as low as N50. The Nigeriancorrection service cannot refute the fact that some of its officialsare the ones who need to be corrected judging by the sort ofatrocities they exude. Everyone knows the system is rotten but to whatextent?The young journalist, charged and thrown into prison for a laughableoffense was not only able to show Nigerians how policemen pervert thecourse of justice in their unquenchable thirst for ill-gotten moneybut also revealed the psychological, emotional trauma and horrorprisoners pass through, the rot in the system, the death of Justice inNigeria. We wouldn’t have known that as long as a prisoner is donnedwith wealth he can live large even within prison walls. We wouldn’thave known that funds meant for the correction service were divertedto be used by private individuals for incorrect use.Well-meaning Nigerians were disappointed when news wafted round thatthe brave journalist spoke from his forced self-imposed exile thatconcerning hiding. Nigerians heaved a sigh of relief that at lastsomething positive will be done regarding the delaying justice systemwhen the investigations were published online but their heavingsmetamorphosed into sighings when the man hunting corruption became thehunted.Fisayo Soyombo who placed himself in dangerous circumstances shouldnot be in a self-imposed exile for exposing the truth. In otherclimes, the authorities do not turn a blind eye to the truth. InGhana, Anas Aremeyaw Anas, a high profile undercover journalistwaddled his feet in the same matter. His investigations led to thearrest and detainment of several judges who were caught on cameraselling justice for some few tokens, for sex, for kinds, for gifts asweird as goats. If Nigeria is truly the giant of Africa, then sheshould be ready to do more than what the government of Ghana has done.Young Nigerians following the trend on social media must bedisappointed by now. They must have gleaned the fact that fightingcorruption in their fatherland only leads to more trouble. They musthave gleaned that it is OK to bury corruption beneath the ground ofsilence, it is safer to see corruption and turn a blind eye, it isnormal for the correction service to be in a serious need of correctpractices. What a brand of future generation Nigeria is breeding!There is no single document that declares that journalists should risktheir lives for the truth. If one man, one journalist, one Nigerian,agrees to uphold the sanctity of his country then I see no reason whythat man should scamper into oblivion after speaking up.The president, Lagos State chapter of the Nigeria Union of Journalists(NUJ), Dr. Rotimi Akinreti's statement on the issue is worth telling.“Why would they want to arrest him? Let them look into the system andclean it up. It portrays Nigeria in a bad image. The only way is toensure that we don’t have a repeat of horrendous and disgracefulservice in the police and prisons. People have been alleging theseills, and Soyombo took a step further by doing a good report. Theinspector-general should commend him for doing a good job,” he said.The Nigerian authorities should hunt corruption and not the one who exposes it.Promise Eze, a campus journalist, writes at ezep645@gmail.com and bereached through 08103911686
Opinion