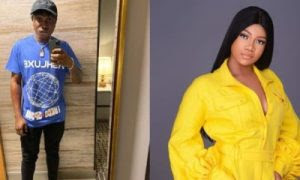 
Tacha who reacted during her media tour at Cool Fm on Wednesday, when the show host asked her what she thinks about the track said, she doesn’t see anything wrong about the track.
Also, she added that she likes Zlatan and also a fan of his music. She concluded by saying its all love.
Her words;
“I didn’t see it as anything, I like #Zlatan and I love his music, it’s all love”,
Entertainment