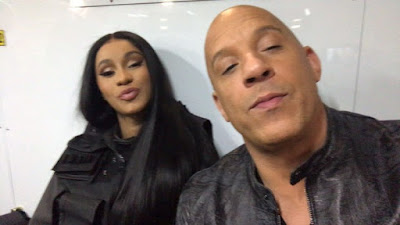 Cardi B is making another appearance in Hollywood after debut act in Hustlers. The rapper is set for a role in the upcoming Fast & Furious 9, Deadline confirms.


Will she be making some driving stunts or be one of the “bad guys”, well, we can’t wait to meet her character in the new movie.
Cardi B isn’t the only music star in the movie. Latin singer, Ozuna will also make an appearance in the star-studded movie.
Vin Diesel revealed the news on Instagram by sharing a video of himself and Cardi B on set. Looking tired and forced to stay awake, they reflected on the final day of the upcoming movie in the United Kingdom.
“Day 86 here on the set of Fast 9. We all gave every single thing we could for this movie,” Vin Diesel said.
Cardi added: “I’m tired, but I can’t wait. I ain’t gonna front, I think this is going to be the best one. I need to take a nappy-nap. I’m ready to take my nappy-nap.”