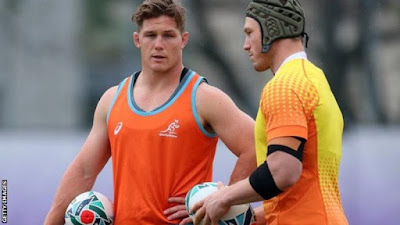 Curry and Underhill said on Thursday it would be "surreal" to face two players they idolised growing up.


"It's going to be a good battle," said Australia captain Hooper.
"We've done our work on them. I think they're great players. They are a top-tier international back row."
Pocock, 31, has announced he will retire from international rugby at the end of his third World Cup campaign, while Hooper, 27, will be playing his 99th Test when he takes on England in Oita.
Underhill, 23, and Curry, 21, have only 28 caps between them and will be starting together for just the fourth time.
However, Hooper said that his and Pocock's experience is not necessarily an advantage.
He added: "It's great to have experience but also being youthful is of benefit. I have been in their shoes before, being wide-eyed, ready to attack things.
"The ruck is a great part of the game. It's going to be, as always, a huge part of the Test match."
Frenchman Jerome Garces, who will referee the match on Saturday, was criticised for being too lenient at the breakdown by some South African pundits in the wake of the Springboks' defeat by New Zealand on the tournament's opening weekend.
Hooper, whose side struggled with discipline early in the tournament, is confident the Wallabies can now work with whatever interpretation the Frenchman brings to the contest.
"I have observed the ruck being refereed a multitude of ways, not any one way in particular. So, it's made it quite tricky there," he said.
"How we start the start the game and definitely adapt to what is going on out there is pretty crucial for us."

'We have been able to get out teeth into Australia'

England scrum-half Ben Youngs says the cancellation of their final pool-stage match against France because of Typhoon Hagibis had given them the chance to go into more depth in their analysis of the Wallabies.
Eddie Jones' side will have had a fortnight out of action when they kick-off in Oita, with their last outing a 39-10 win over a 14-man Argentina on 5 October.
"We have been able to get our teeth into Australia earlier, look at their footage and the pattern we want to play," said Youngs.
"We feel fresh and ready to go."
England coach Jones has brought centre Henry Slade into the side as part of a backline reshuffle that saw pool-stage fly-half George Ford dropped to the bench and his preferred Six Nations 10-12-13 combination of Owen Farrell, Manu Tuilagi and Slade restored.
Slade's last international start was in March with his recovery from a knee injury restricting him to replacement appearances against Tonga and Argentina since.
Tuilagi believes the trio can rediscover their best form immediately, though.
"Henry is massive for us," he said.
"He can play, run, kick, he can do it all round, so for him to in our backline adds a massive part to our game.
"With Faz at 10, we have been together for a while and understand each other well. Hopefully that will come out tomorrow."