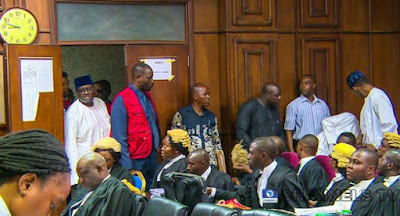 
Maina was arraigned on Friday and pleaded not guilty to the 12-count charge bordering on money laundering, operating fictitious bank accounts and fraud brought against him.
At the resumed hearing of the case, the defence counsel, Ahmed Raji, asked the court to allow the defendant more time and facility to prepare for his defence.
Prosecution counsel, M.S Abubakar, in his submission told the court that they were ready for the commencement of the trial since the defendant was in court.
The prosecution urged the court not to consider the application filed by the defence for bail, describing it as incompetent.
Delivering his ruling after he had listened to the arguments of both prosecution and defence counsels on bail application, the presiding judge, Justice Abang Okon, ordered Maina to be remanded at the correctional service and be allowed to see his lawyers.
Abang also fixed November 19, 2019 to consider the competence of the bail application filed prior to Maina arraignment
He therefore adjourned the matter to October 30 for commencement of trial.
He added that the trial would be day to day and no frivolous application for adjournment would be entertained.
After a four-year manhunt, Maina was arrested by operatives of the Department of State Services at a hotel in Abuja after allegedly sneaking into the country from Dubai, United Arab Emirates.
News