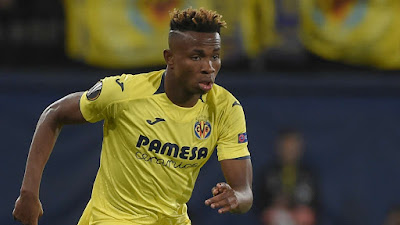 
Chukwueze has established himself as a key player in Javi Calleja's team since he made his first-team debut in the Spanish top-flight last season.
The 20-year-old plays on the right flank for the Yellow Submarine and his qualities on the field have drawn a comparison with Mane, who is one of the key players for Liverpool.
Moreno played alongside the Senegalese star during his time at Anfield and he is convinced about the similarities the two players share together.
"He's very good, very good," Moreno was quoted as saying by Marca.
"It'll seem like bulls**t, but I've been following him since last season. He's super incisive, fast; you never know where he's going to go.
"He's strong too, young, and defined. He's a lot like Sadio Mane. I've seen the two in training and they're very similar.
"He has a lot to learn because he's very young, but he'll become an even better player than he is [now]."
Chukwueze, a scorer of two goals in La Liga this campaign, is one of 10 nominees for the 2019 Kopa Trophy.
Sports