China silences critics by denying access to its economy 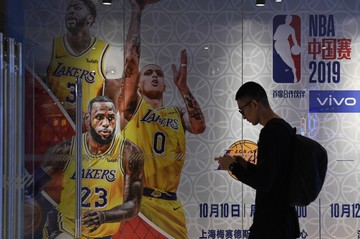 US President Donald Trump called the US-China trade war truce a "substantial phase one" agreement. But any talk of a truce in the trade war is wide of the mark.


Washington has not removed any tariffs and got a little relief in the form of an aid package for its farmers. Beijing got crucial access to pork after its pig farmers were decimated by swine flu.
The ongoing trade tensions have led to an economic war in all but name. Washington slammed 28 Chinese tech companies with sanctions for their part in the repression of Uighur Muslims.
Now, Beijing is targeting foreign companies and using access to the Chinese market through systems like corporate social credit as a weapon against those who criticise its policies. The NBA was the latest to step into the Chinese quagmire after China took offence to a team executive's tweet in support of the Hong Kong protesters.
Simon Chadwick, professor of sport enterprise at the University of Salford, tells Al Jazeera he was surprised by the incident given the NBA's investment and efforts to boost the sport of basketball in China.
"The NBA for the best part of two decades now, has not only invested a lot of money but has also invested a lot of their time into their activities in China and this has really helped to not only boost the NBA in China itself, but also to boost basketball more generally," he says.

A few years back you could rent an oil tanker for less than the price of hiring a Ferrari. But now, the cost of shipping crude around the world has shot up to 11-year highs after the United States blacklisted Chinese ships.
More than 40 Very Large Crude Carriers, or LCCs, operated by China's Cosco Shipping Energy Transportation have been blacklisted for moving sanctioned Iranian oil. Cosco has a total of 1,100 ships. Iran's oil tankers - of which there are estimated to be about 54 - have also been sanctioned.
In total, nearly 300 tankers have been blacklisted, including Venezuelan ships. That represents about three percent of the world's oil tanker fleet, according to Refinitiv Eikon. This has sent the cost of hiring a ship from $18,000 to almost $300,000 a day.
Rajat Kapoor, managing director of oil and gas at AWR Lloyd, explains that a big effect of tanker prices and where they are today has got to do with the current sanctions the US administration has put on Iranian crude oil.
"The US as you know, last month, imposed sanctions on tanker subsidiaries of Cosco, which is China's shipping line and which is the largest shipping line in the world. Once you have the sanctions coming in the US on these entities, on these tankers, they suddenly become hotcakes. Nobody wants to touch these tankers. These volumes are then taken off of international trade," Kapoor says.
Business Sports