'Can I have my balls back please?' - Batshuayi calls out Jorginho 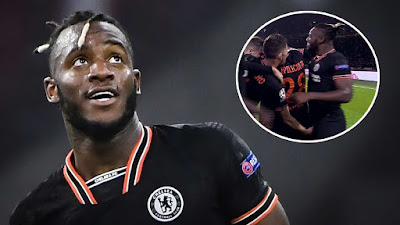 Michy Batshuayi has called out Chelsea team-mate Jorginho for his bizarre celebration in a Champions League clash with Ajax which saw the Italy international poke him in the crotch.


The Blues left it late to claim an impressive away win against last season’s semi-finalists, with the only goal of the night in Amsterdam delivered in the 86th minute.
Belgium international striker Batshuayi was the man to get it, as Frank Lampard’s side secured a sixth successive win in all competitions.
Emotions were understandably running high as three welcome European points were secured.
Jorginho, though, got a little over-excited and friendly with Batshuayi, with the midfielder taking to tickling a club colleague in an unexpected area.
The Belgian, who has now netted in three consecutive games for club and country, was able to see the funny side of a curious incident.
He did, however, have one very obvious question for Jorginho when taking to social media: "Why?"
With Jorginho opting to overlook his actions when offering his own response to a welcome win on Dutch soil, Batshuayi decided to bring it up again.
He said: “Can I have my balls back please?”
Batshuayi had only been introduced in the 71st minute against Ajax, and squandered one opportunity before his big moment arrived.
He replaced Tammy Abraham with Chelsea in need of attacking inspiration and Blues boss Frank Lampard was delighted to see his replacements – with United States international Christian Pulisic making another important contribution off the bench – deliver when it mattered.
He told BT Sport: "The fact Christian Pulisic comes on in the last two games and gets two assists, changes games, I thought his performance was outstanding for 25 minutes or whatever it was.
"And Michy, the great thing about the strikers I've got is that, even though Tammy has been scoring for me, the other two stayed patient, worked hard, supported the group and they've got talent.
"So, it was a choice to bring Michy on because of how mobile he can be and he's waited for his moment and he fully deserved his moment there."
Sports