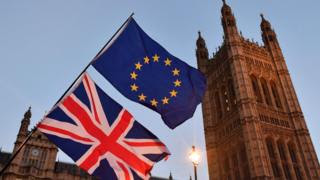 The PM has been trying to convince MPs to support the agreement he secured with the EU, ahead of what is expected to be a knife-edge vote in the Commons.


His former DUP allies and opposition parties plan to vote against it.
Brexit Secretary Stephen Barclay admitted the vote could be "close" but said the government has "listened to the concerns of MPs across all sides".
"Now it's time for MPs to step up to their responsibility to get this deal passed, and allow the country to move forward," he told BBC Breakfast.
At least nine Labour MPs are expected to rebel and the PM is hoping to be backed by some of the Tory MPs he sacked for opposing him last month.
BBC deputy political editor John Pienaar said numbers for the vote looked "painfully tight", adding Mr Johnson "either has to win round the DUP - which looks close to impossible - or look elsewhere for votes".
Business in the House of Commons will start at 9:30 BST - the first weekend sitting since the invasion of the Falklands in 1982.
Mr Johnson will make a statement to MPs and face their questions before the House moves on to a debate about the deal.
The timing of any votes depends on which amendments are chosen by the Speaker of the Commons, John Bercow, but they are not expected before 14:30.
Mr Johnson's revised deal with the EU was secured at a Brussels summit on Thursday.
It ditches former PM Theresa May's backstop, the measure designed to prevent a return to physical checks on the Irish border. Instead it will, in effect, draw a new customs border along the Irish Sea.
Ahead of the Commons debate, Mr Johnson urged MPs to "come together" to back his Brexit deal, insisting there was "no better outcome".
A number of Tory MPs who voted against Mrs May's agreement on all three occasions it was put to the Commons have said they will be supporting the deal.
BBC political correspondent Nick Eardley said the latest hardline Brexiteer MP to give Mr Johnson his backing was Mark Francois, the deputy chairman of the European Research Group.
Although the ERG has not issued a united statement on whether it will support the deal, some individual members such as Iain Duncan Smith have pledged their backing.
Also crucial to Mr Johnson's hopes of success will be the 21 Tories who had the whip withdrawn for supporting a bill to force the PM to seek an extension to avoid a no-deal Brexit.
Sir Nicholas Soames, who is one such former Tory, has indicated he will vote in favour of the deal, adding the other 20 would "by and large vote for it".
However, Northern Ireland's Democratic Unionists have made clear they will not be voting for the deal and have been trying to persuade hardline Brexiteers to follow their lead.
Meanwhile, the prime minister told the BBC's Laura Kuenssberg he wanted the country to "move on" from Brexit.
And writing in the Sun, Mr Johnson urged MPs to back his deal, saying: "There have been any number of false dawns. Deadlines for our departure have come and gone.
"I ask everyone to cast their mind forward to the end of today - and imagine what it could be like if the new Brexit deal has been approved.
"A difficult, divisive and - yes - painful chapter in our history would be at an end."
However, on Friday evening, Jeremy Corbyn tweeted the Labour Party was "united in opposing" Mr Johnson's "sell-out Brexit deal".
He said his party would "come together and reject it".
Earlier, in a letter to his own MPs, Mr Corbyn said the new agreement was a "worse deal" than the one Mrs May struck with Brussels. He said the proposals "risk triggering a race to the bottom on rights and protections".
Ahead of the vote, the government appears to have moved to allay concerns expressed by some Labour MPs by announcing that workers' rights and environmental standards will be boosted post-Brexit.
Downing Street confirmed its pledges followed discussions held with opposition MPs.
Mr Johnson has repeatedly said Brexit will happen by the end of the month with or without a deal.
However, MPs passed a law in September, known as the Benn Act, which requires the PM to send a letter to the EU asking for an extension until January 2020 if a deal is not agreed - or if MPs do not back a no-deal Brexit.
Former Tory Sir Oliver Letwin - one of the MPs who lost the Tory whip for backing the law - has put an amendment down to ensure the extension is asked for even if MPs back the deal in the Commons later.
He said the government could still leave without a deal on 31 October if Mr Johnson's proposals had not passed every stage in Parliament to become law - so the motion would withhold MPs' approval until that final hurdle is passed.
Sir Oliver said his amendment would make it easier for Labour MPs to support the PM, stressing: "My aim is to ensure that Boris's deal succeeds, but that we have an insurance policy which prevents the UK from crashing out."

And after three years of chicanery, on Saturday another decision will be put before the Commons - one that gives MPs what sounds like an elegant way to give only qualified approval to his deal, which might have brutal political effect.
The Letwin amendment is at best is a mere insurance policy that avoids an accidental departure without a formal agreement.
But by the author Oliver Letwin's own admission, it blurs today's decision.
And at worst, it's seen by government as one more rock cast in the path towards departure, another excuse for reluctant MPs to apply the brakes.
So today may not be a moment of saying the simple yes or no the prime minister craves.
The Commons once more will be asked to pick, between this deal, no deal, or another delay.
But the prime minister will keep, and keep, trying to force a moment of clarity.
Read more from Laura here
On Friday, the governor of the Bank of England welcomed the new deal, saying it would take away the "risk of a disorderly Brexit" - but added it would not boost the economy to the same extent as the previous deal struck by Theresa May.
Mr Barclay said he disagreed that the new deal was not as good for the economy, saying it allowed the government to "secure trade deals" around the world.
Asked why the Treasury has not published analysis of the economic impact of the new deal, Mr Barclay replied: "The deal was only reached on Thursday.
"We've only had two days. "
Politics