Beyond the Twitter Dragging of Glory Osei & Muyiwa Folorunsho, Nigerians Need to Pay Closer Attention to a Few More Things 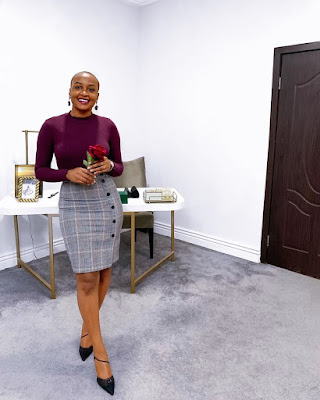 This week started with a lot of gbas gbos on Twitter. Steaming gist about Glory Osei & Muyiwa Folorunsho‘s alleged terrible treatment of their staff was flying everywhere. In fact, there were claims that their businesses might not be so legit. Allegedly.


It all started when Glory Osei decided to help Nigerian youths by posting certain vacant positions in her company on Twitter (which she later deleted). 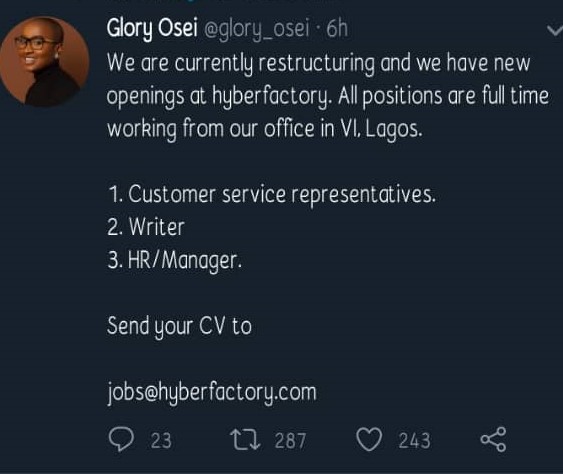 Then a former employee decided to burst kasala...

Nigerians, who have set their ears ready for gist, pressed for an explanation and she decided to spill the whole tea. 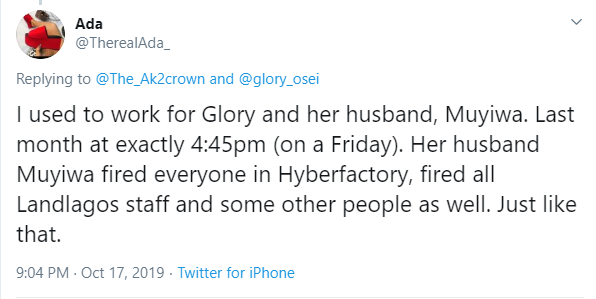 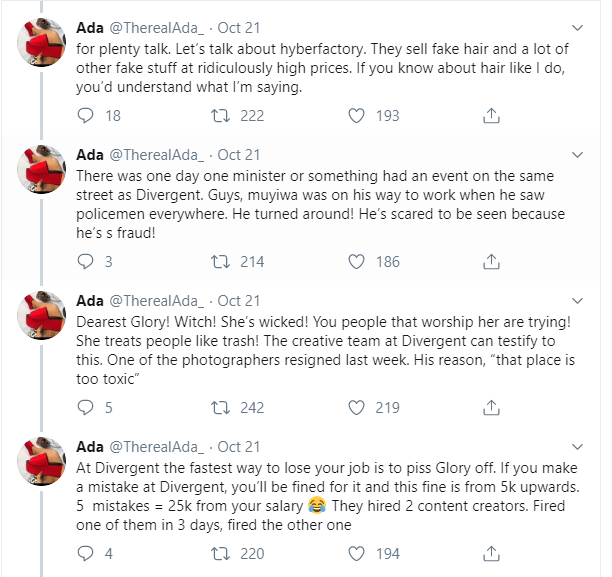 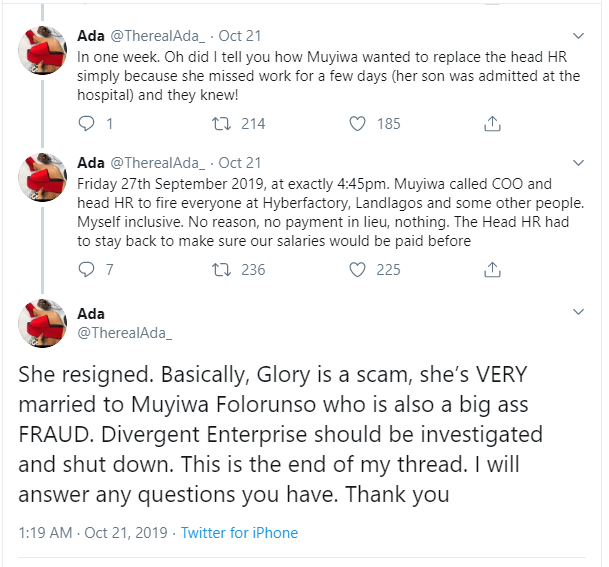 It didn’t end there, ex-employees of Glory Osei and Muyiwa Folorunsho trooped out en masse to recount their experiences and ordeal in the hands of their former employers. 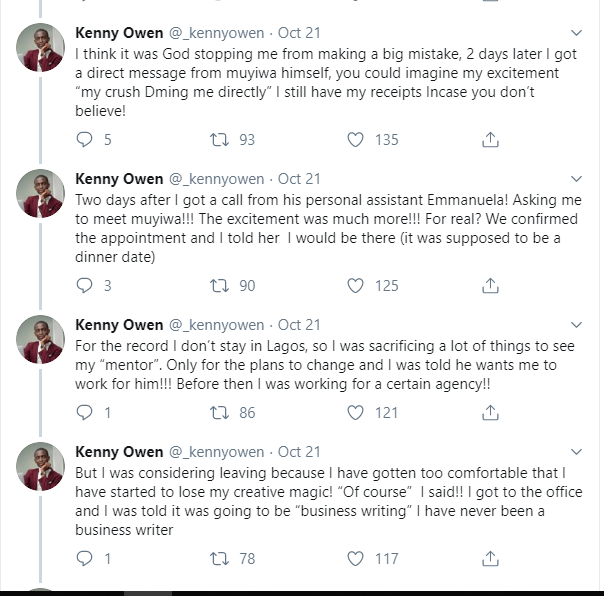 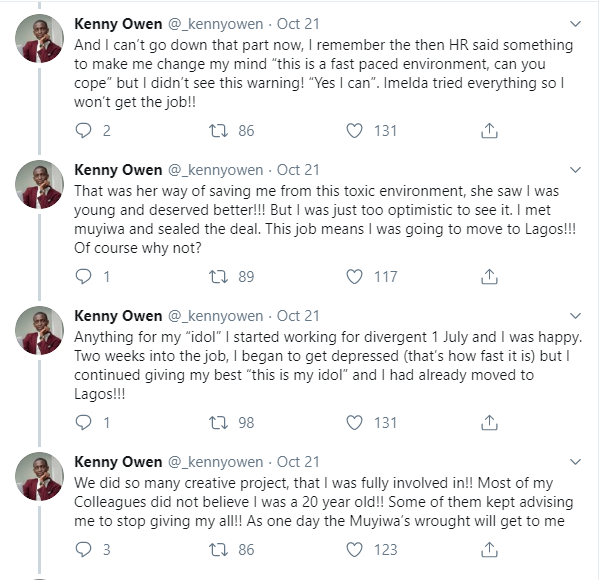 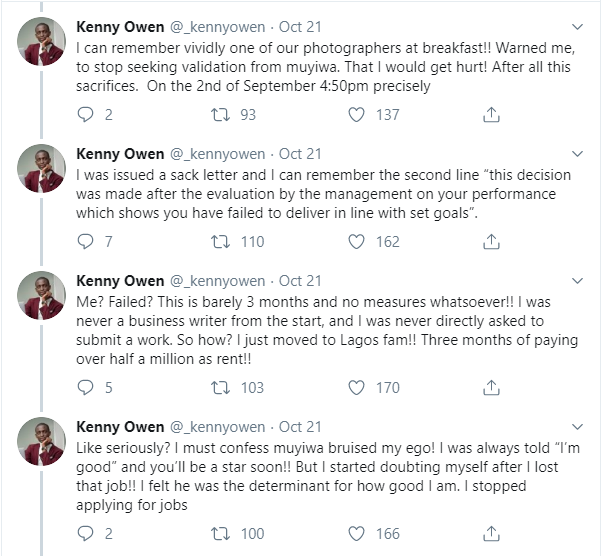 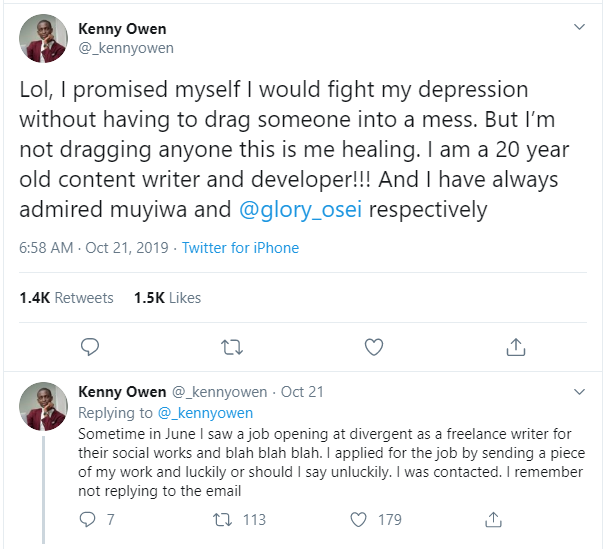 They revealed secrets, sprayed pepper in their eyes and dragged them both through the length and breadth of Twitter.
Trust Nigerians! Many people also saw it as an opportunity to drag feminism, feminists, the men are scum gang and women in general…
So now that the whole brouhaha and noise on social media has died down, because Nigerians have moved on as usual, let us look into this issue and the many complicated issues that have sprouted from it.

The employability of Nigerian youths…

For a really long time, the employability of Nigerian youths has been under serious scrutiny and repeatedly debated – despite the efforts of many youths to prove their worth. An average employer in Nigeria will tell you that Nigerian youths are not employable – and we keep wondering why. According to them, Nigerian youths are not self-motivated, lack resilience, are lazy, want quick money, are not teachable, are not down-to-earth, are not this and that.
What they will not tell you is that many Nigerian employers are mean people who want to pay peanuts for strenuous labour. If possible, they wouldn’t want to pay at all. You cannot offer people 50,000 Naira, expect them to work from 7am – 7 pm, Mondays to Saturday and then come online to bash Nigerian youths.
The high unemployment rate in our country is so bad that employers are leveraging on this to offer the youths next-to-nothing, in exchange for so much work. Worse still, many of them want you to handle 2, 3, 4 roles while being paid for one job. For instance, a company will ask for a content writer with a payment offer of 50k. When the writer resumes, they then request that he/she handles the social media page. Then they introduce digital marketing into the job role – all for 50k. In all of these, the company might still be owing the employee 2 months salary. If the employee finally decides to leave, they’ll say he/she lacks resilience.Resilience kee you there.
This scenario is really common, and there are worse stories. Some Nigerian graduates earn 20k monthly. The fear of not getting another job is what keeps them stuck in their toxic poor paying job.
We need to address this. We need to change this. We need the Nigerian Labour Congress to take proper actions to demand better working conditions for Nigerians.

When issues like this arise, one would also expect that Nigerians would arise in fury (well, not really in fury), speak with one voice, demand justice and ensure that justice is meted out. But no, many people turned this ‘very critical’ issue into bants and an opportunity to bash feminists. Doubt us? We have proof! 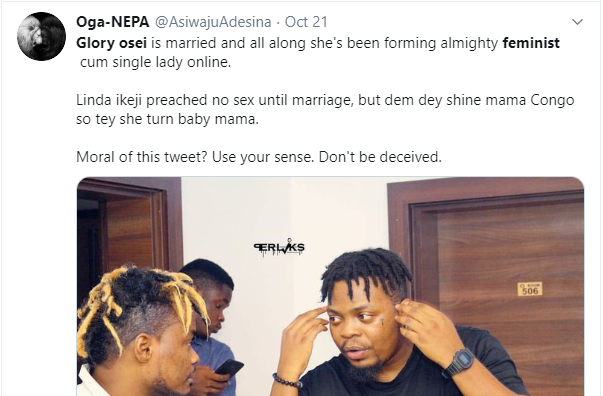 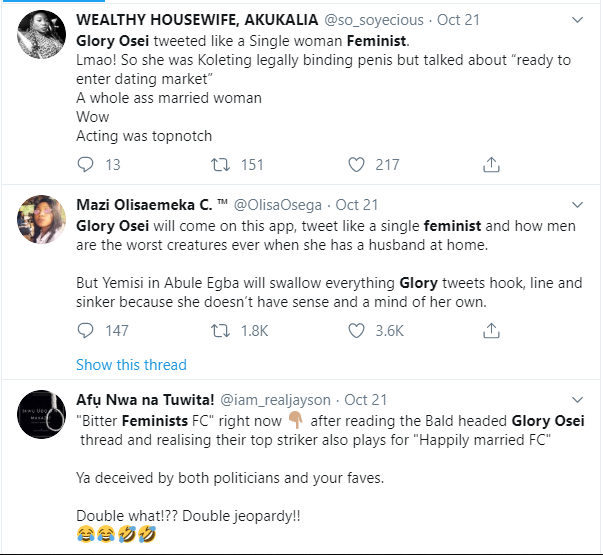 It is bemusing that people could make this issue – that affects almost all Nigerians – about feminism. Our constant need to bash feminists – when a woman does something wrong, or mock and advice women – when a woman falls into trouble, tells a lot about who we are as people and where our priorities lie.
The way people were so swift to throw Glory Osei under the bus while almost letting go of her husband, Muyiwa, also shows how quick Nigerians are to castigate women. It becomes all fun and games to see a woman (especially if she identifies as a feminist) fall.

When will Nigerian Youths be focused?

Our inability to focus on critical issues plaguing us is one of the reasons we are so backward as a nation. While we banter away – fighting religious and tribal wars, fighting feminism and feminist – the country steadily sinks lower.
Our ability to just rant on social media without taking any actions offline is also one of the reasons why we do not experience positive change. We never fight for a cause, we are never serious, we laugh, make memes and have fun over critical issues – and then we expect things to change and the government to take us seriously. How na?
Barely 24 hours later, people have moved on.

Don’t be quick to stan!

And for those of you who are so quick to make random people on social media your mentor, now is the right time to shake your table. The whole Glory Osei and Muyiwa Folorunsho saga simply proves that the world of ‘personal branding’ and ‘social media packaging’ has made thieves become honourable men and cruel people look nice. A perfect example is the not-too-recent case of Invictus Obi. Making people – who you do not personally know – your mentor, and following their every word says a lot about who you are too.
We can’t fault you for admiring and loving them, but the onus rests on you to filter information and decide which will be useful for you.
Opinion