#BBNaija 2019: All you need to know about 36 celebs behind Mercy, Mike and Tacha 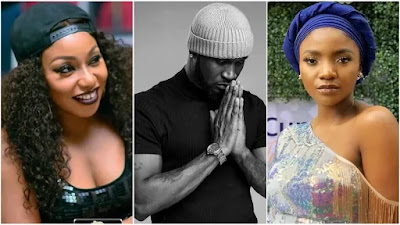 All the 26 housemates - many getting evicted during the reality show - entertained viewers and earned themselves love from viewers that became fans.

Rita Dominic: The movie star supported and campaigned for Mercy all through the 99 days and consistently urged her follwers on social media and fans to vote for her.
Lola Okoye: Lola Okoye and her husband loved the BBNaija reality TV show but supported different housemates. She rooted for Mercy while her husband rooted for another housemate.
Ifu Enada: Ifu Enada didn't mince words in her support for Mercy. She posted videos and many more urging fans and followers to vote for Mercy.
Dencia: Dencia was not in Nigeria all through the 99 days that BBNaija Pepper Dem held but she had Mercy as her favourite and she ensured her fans and followers voted immensely for her.
Ngozi Nwosu: Popular Nollywood actress was one of those that campaigned for Mercy all through her stay in the house.
MC Galaxy: MC Galaxy was one time rumoured to be the man behind Mercy's social media account and he did a damn good job. His support and campaign for Mercy remained unshaken till recently.
Nina Ivy: The ex-BBNaija housemate didn't waste time in picking her favourite from the 26 housemates and she stood by her all through.
Ruggedman: Rapper and social activist, Ruggedman couldn't help but join in showing support and love to Mercy.
Humble Smith: Humble Smith is one of the supporters of Mercy and he followed through until the end.
Annie Idibia: Annie Idibia, actress and wife of star singer, 2Baba is also one of the biggest campaigner and supporter of Mercy.
Halima Abubakar: Halima Abubakar supported and campaigned for Mercy while she was in the BBNaija 2019 Pepper Dem house.
Mercy Aigbe: Though her campaign wasn't consistent, Mercy Aigbe showed support for Mercy and when she was up for eviction, she rallied round her followers and fans to vote for her.
Uche Elendu: Her social media page is an evident of her belief in Mercy and equally her unfailing support for her brand. Elendu supported Mercy till the end and kept campaigning till she was announced the winner.
Susan Peters: Though Susan respects Mike's game, she insists Mercy is the real deal that deserves to win the BBNaija 2019 Pepper Dem edition.
Osas Ighodaro: Nollywood star actress, Osas Ighodaro supported and campaigned for Mercy during her 99 days in the house.
Seyi Edun: Yoruba actress, Seyi Edun was also one of the supporters of Mercy and she followed through until the end.
Lilian Afegbua: Ex-housemate of the Big Brother Africa, Lilian Afegbua pitched her tent with Mercy and she supported and campaigned for her till the end.
Anita Joseph: Sensational actress, Anita Joseph was also one of the supporters of Mercy and she followed through until the end.
Uti Nwachukwu: Winner of BBNaija Africa, Uti Nwachukwu stuck with Mercy from the kick off till the last day. His support included campaigns and giving reasons she deserved to win.
Ushbebe: Ushebebe's campaign and support for Mercy was out of the world. All his social media handles were always buzzing with reasons his fans and the general public need to vote for Mercy.
Khloe: Ex-housemate of the BBNaija 2019, Khloe didn't watch long before pitching her tent with Mercy.
Swanky Jerry: Celebrity stylist, Swanky Jerry couldn't help but join many of his friends to support Mercy and campaign for her victory.
Laura Ikeji: Fashion expert, Laura Ikeji is one of the biggest supporter of Mercy. She campaigned using her social media handles and couldn't hold back her joy when Mercy was announced the winner.

Peter Okoye: Peter Okoye openly supported and campaign for Tacha despite blows and jabs from several quarters. He was one of the individuals that championed the titan cause till the end.
Naira Marley: Rave singer and rapper, Naira Marley didn't hide his support for Tacha and even after her disqualification, he stayed true to the Port Harcourt first daughter.
Matshe Uwatse: Matse's love for Tacha grew after she visited the BBNaija house as one of the judges of the Arla butter challenge. She didn't mince word in saying she will support and always love Tacha.
Tee Billz: Tee Billz was another individual that supported Tacha. His support knew no bond even after Tacha's disqualification. He has since assumed the role of Tacha's manager.
Nkechi Blessing: Nkechi Blessing, the popular Yoruba actress was also one of the supporters of Tacha and she followed through until the end.
Angela Okorie: Nollywood actress, Angela Okorie is also one of the biggest supporter of the Tacha brand. She showed support and campaigned for her remained stay in the house.
Eve Esin: Another Nollywood actress that showed massive support and campaign for Tacha is Eve Esin.
Maureen Esisi (Redvigor): Businesswoman and Instagram influencer, Maureen Esisi is also another top notch titan. She supported and campaigned for the Port Harcourt first daughter.
Benson Okonkwo: Nollywood actor, Benson Okonkwo also lent his support to Tacha through constant campaign on his social media platforms.

Simi: Soulful singer, Simi showed her support for Mike over other housemates And this she showed with campaigns to keep her in the house.
Iyabo Ojo: Nollywood actress and producer, Iyabo Ojo is one actress that has shown love and support to Mike. The actress is constantly campaigning and seeking votes for the Cruise king.
Tayo Odueke: Nollywood actress, Tayo Odueke, who is widely known as Sikiratu Sindodo chose Mike over other housemates and she campaigned for him.
Toyin Abraham: Toyin Abraham supported and campaigned for Mike during his stay in the BBNaija 2019 Pepper Dem house.


MC Oluomo: MC Oluomo is another popular individual that threw his weight behind Mike to win the grand prize of N60 million at the BBNaija 2019 Pepper Dem edition.
Entertainment