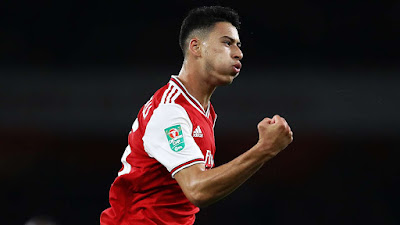 When Reading travelled back to Berkshire following a behind-closed-doors friendly at London Colney during the international break, the conversation on the coach centred around an Arsenal player.


It wasn’t Hector Bellerin or Rob Holding, who both featured in the Gunners' back four that day. It wasn’t even Mesut Ozil – who was pulling the strings in his favoured No.10 role, trying desperately to impress the watching Unai Emery.
It was, in fact, teenage attacker Gabriel Martinelli who made such a huge impression on Arsenal's opponents.
“He’s so sharp,” a Reading player told Goal after the 2-2 draw – in which the Brazilian netted.
“He just doesn’t stop, his work-rate was phenomenal and he’s incredible in the air for someone who is not exactly the biggest.
“Arsenal have got some player on their hands there.”
That's a view which is backed up by Rob Holding, who knows first-hand what it's like to try and deal with the livewire forward.
“In training every day, he works hard," said the Arsenal defender. "He puts you under pressure constantly and never stops running, which, as a centre-half, is a nightmare.
“You want a striker that will give up on you, but he never gives up and his finishing has been unbelievable, even with his head. He's only a small guy but the headed goals he's scored have been incredible."
Certainly, seeing Martinelli's name on the scoresheet is becoming something of a familiar occurrence at Arsenal.
In fact, as we head towards November, the 18-year-old is the club's second-top scorer, having found the net four times in just five appearances in all competitions – only Pierre-Emerick Aubameyang has scored more.

Martinelli will have another chance to add to that tally on Thursday night as he is expected to start against Vitoria in the Europa League.
He scored twice in his previous outing in the competition, producing two fine finishes in the space of four minutes as Standard Liege were put to the sword earlier this month.
It was a performance that demonstrated the immense talent the young striker possesses, underlining why Arsenal were so keen to bring him to England from Brazilian state side Ituano FC.
Many had looked at Martinelli in the years before his move to north London. His plan has always been to move to Europe but despite trial spells with both Manchester United and Barcelona, a transfer hadn’t materialised.
He didn’t let his head drop, though; he stuck to his plan. He continued to work hard, with his desire to leave South America undiminished in spite of the knockbacks.
And then Arsenal came knocking earlier this year, with Francis Cagigao the man behind the transfer.
At the time, Cagigao was the club’s head of international recruitment but he now leads the club’s scouting network following the departure of Sven Mislintat.
Arsenal scouted Martinelli extensively in the months prior to the move, watching him several times in Brazil while also compiling a detailed database of his qualities from London Colney using video analysis.
Cagigao – who is known for his strong contacts in South America – then travelled to Brazil himself to watch Martinelli in action on more than one occasion before putting the finishing touches on a £6 million ($7.7m) transfer.
The deal was done in May, but Martinelli didn’t arrive until he turned 18 in June.

Many initially believed that the youngster would be farmed out on loan or that he would link up with the Under-23s while he acclimatised to his new surroundings.
However, Martinelli’s plan never included spending any time with Arsenal’s under-age sides. He had signed to play with the first team and he was determined to make an immediate impression.
"It is a dream since I was a child and also my family’s dream for me to be playing in Europe and playing for a big team like Arsenal,” he said upon joining. “I am going to take this opportunity."
And, so far, the youngster has done exactly that. Indeed, his story is similar to that of Matteo Guendouzi.
When the Frenchman arrived at the Emirates as a 19-year-old last summer, he was viewed as one for the future, given he had spent the previous season playing Ligue 2 football with Lorient.
However, the midfielder impressed during pre-season and now, just over a year on, Guendouzi is on the 20-man shortlist for the prestigious Golden Boy award.

Given Martinelli’s drive and determination, it would be no surprise to see the forward following in his team-mate’s footsteps when the contenders are announced for the 2020 prize.
Whenever you speak to someone at Arsenal about the Brazilian, the word "hunger" always crops up in the the conversation.
“Whether it's his football or his attempts to learn the language, he works so hard to improve,” one source told Goal. “He’s so professional, there’s a hunger about everything he does. He really is an impressive young man.”
Even before he arrived in north London, Martinelli was having English lessons in a bid to help him adapt as quickly as possible.
He continues to work hard on his linguistic capabilities, regularly sitting down to practice with his teacher, both at training and at his home, where he lives with his father Joao – a retired toolmaker.
He has also started taking part in yoga sessions at London Colney as a way of improving his English and it’s that type of dedication that has seen the forward make such a positive impression since making the move to England.
“Martinelli is a very young player,” said Emery. “But he is very humble, he fights, he's hungry to help us.
"He is with us because he deserves to be with us.”
Some supporters questioned Arsenal's decision to allow Eddie Nketiah leave on loan for Leeds in the summer, given it left Alexandre Lacazette and Pierre-Emerick Aubameyang as the club’s only recognised strikers.
However, in just two months, Martinelli has shown he is more than ready to step in when needed.
And against Vitoria he will get the opportunity to add another chapter to his already impressive Arsenal story.
Sports