Arsenal decided as a whole to drop Ozil - Emery 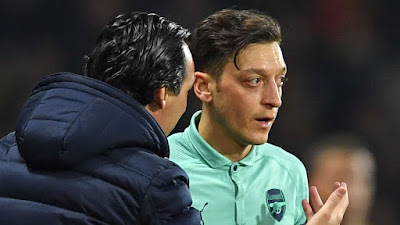 Unai Emery says the decision to leave Mesut Ozil out of the Arsenal squad was made by the whole club and not just him.


The 31-year-old has made two appearances in all competitions for the Gunners this season and has not been included in the matchday squad since September.
Although there are growing calls among Arsenal fans for the attacking midfielder to return to the side, Emery has kept quiet on the reason for his exile.
But the Spanish coach says he has the support of the Arsenal board as the dispute continues.
"Here, we have one agreed strategy as a club and a team," Emery said. "Because the most important thing is the club, the team and finding a performance.
"Previously we were all speaking between us to take that decision. I know all the supporters want to know something but now is not the moment. I think it is not the moment to speak about him.
"We are going to play on Sunday and in the next matches and we are going to decide, and when we can speak about him something differently we will look."
As Ozil's absence continues ahead of Sunday's home game against Crystal Palace, Emery is keen to see Lucas Torreira try his hand at a more advanced role again after his performance against Vitoria in the Europa League on Thursday.
“He is playing. I think he is very important for us," he said of the Uruguayan. "We are sharing and changing some matches with the midfielders like [Matteo] Guendouzi.
“I am very happy with him and we need him. Then we use different structures in different matches and he has confidence. I was speaking with him about his best position to help us in our shape.
"It depends on the shape. Last season his best position was playing as a deep midfield two alongside [Granit] Xhaka or Matteo.
Article continues below
"This year we are playing also sometimes with just one, and he can achieve with his quality to get to the box and get closer to score and is very intelligent about getting space around the box and taking chances.
"Then also, when we prepare the team to do high pressing, for us he is very important because he is very intelligent tactically but he can play in the two positions - the two midfielders, he can play higher for the pressing and to get into the box.
"Sometimes we also use him as a one-man in midfield doing the covering for the two other players ahead."
Sports