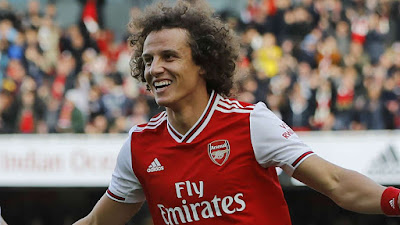 Arsenal defender David Luiz is confident his side can challenge for the Premier League title this season.


The Gunners have not lifted the English crown since 2004 and have finished outside the Premier League's top four in each of the last three seasons.
Unai Emery's team are third in the table after eight games and sit nine points behind leaders Liverpool, who have a perfect record.
The north London side may have struggled to compete for the big prize over the last 15 years, but their Brazilian centre-back believes they must have faith that they can narrow the gap before the campaign is over.
"For me, if you start something, and we've just started the Premier League and all of the competitions, if you don't think you can win the competition then you won't start anything in your life," Luiz, who joined Arsenal from Chelsea last summer, said in an interview with NBC Sports.
"I want to win titles with Arsenal. I want to improve and adapt myself for the style of Arsenal, as a club and how the manager wants us to play. I think we can do that together.
"My vision, my ambition and my will is always to fight for the title and between the club, the players and the coach, we have the possibility to fight for the title. I think this club deserves to shine again."
While Arsenal have conceded just one goal in their last four games in all competitions - scoring 11 times in that run - they have not shaken off the criticism that their defensively-shaky early-season performances received.
But the 32-year-old defender says things are getting better under Emery and that they will soon be competing with Liverpool and Manchester City.
"I think Unai is working very well with the plan to defend and then the plan to attack," he added. "I always say defending starts with the strikers and through the whole team, and you can see with modern football that the goalkeeper is now like a No 6.
"We are going to try and improve, we are already doing well and the last few games have showed that we are stronger in a defensive way. I want this club to improve in every part of the game.
"I think we've started really well and we just lost one game in the Premier League. I think the team is improving and now we are in third in the table but we want to finish this season fighting for the title."
Sports