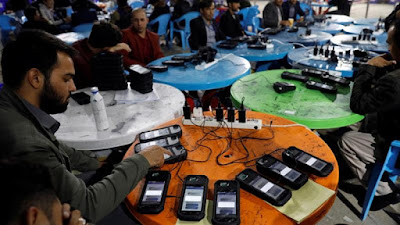 The preliminary results of Afghanistan's presidential election expected on Saturday have been delayed, the election commission has said, without specifying a date for the announcement.


Awa Alam Nuristani, head of the Independent Election Commission (IEC), said the delay was to assure "fairness, transparency and accountability of the final vote".
"Unfortunately, because of some technical issues and for transparency, we could not announce the results based on the election timetable," Nuristani said at a press conference on Saturday.
She did not say how long the vote count will be delayed.
The IEC previously said that less than one-third, or about 2.7 million of Afghanistan's 9.6 million registered voters, cast ballots in the September 28 first-round poll.Officials had previously indicated that an announcement would likely be pushed back.
With fears of fraud and threats of deadly Taliban violence, it was a record low turnout.
The contest featured 18 candidates. President Ashraf Ghani, seeking a second five-year term, and Afghanistan's Chief Executive Abdullah Abdullah, are the frontrunners.
Just two days after the election and before all votes had even arrived in Kabul for counting, Abdullah claimed victory in a move that international and local observers panned as premature.

Voting this year was supposed to be more secure than ever, with each voter verified through biometric machines to ensure no one could cast multiple ballots.
On October 12, his running mate Asadullah Saadati complained of "systemic fraud" organised by "circles within the election commission and the palace".
The IEC has repeatedly said it would not count votes unless they had been verified biometrically.Saadati claimed the IEC was counting "fraudulent" and non-biometric votes.
But the use of biometric readers to prevent repeat voting complicated the process, partly because communication breakdowns prevented data from numerous readers being transmitted to the IEC on voting day.
Instead, the machines had to be taken to the commission in Kabul to extract the data.
Highlighting the challenges it faces, the commission said unidentified hackers unsuccessfully attempted to break into its servers.
Election officials have called on candidates to show restraint and wait for the preliminary results in a bid to avoid a repeat of 2014 when that year's election was marred by duelling claims of victory and fraud by Abdullah and Ghani.
The IEC's initial timetable called for final results on November 7, after which a second electoral round would be held within two weeks if necessary.
Politics