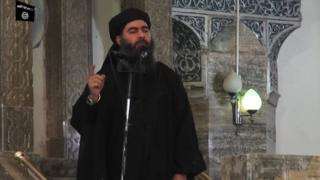 There has been no official confirmation of reports that Abu Bakr al-Baghdadi was killed in the raid. He has been wrongly reported dead on several previous occasions.


US President Donald Trump is due to make a "major statement" at 1300 GMT.
Mr Trump earlier tweeted: "Something very big has just happened!"
A villager in the village of Barisha in Idlib province, north-west Syria, described to the BBC a dramatic military operation late on Saturday night.
He said helicopters had launched an assault that lasted 30 minutes, firing missiles at two houses and flattening one, before troops became active on the ground.
The commander of the Kurdish-led Syrian Democratic Forces (SDF), Mazloum Abdi, said on Sunday that a "historic, successful operation" had resulted from "joint intelligence work" with the US.
Turkey has also said it co-ordinated with the US military ahead of the operation, describing it as "a good day for the good guys".
The raid was carried out by US special operations forces after they received "actionable intelligence", Newsweek said, citing unnamed sources.
The Syrian Observatory for Human Rights, a UK-based monitoring group, said helicopter gunfire had killed nine people near a village in the Syrian province of Idlib, where "groups linked to the Islamic State group" were present.
This is not the first time the fugitive IS leader has been reported killed, but this weekend US officials have been speaking with confidence about a decisive operation to target him.
Baghdadi - his adopted nom de guerre rather than his real name - has been a key jihadist leader in both Iraq and Syria since 2010. Before then, he was incarcerated in the US-run Camp Bucca in southern Iraq, where he formed alliances with other future IS operatives.
As Syria collapsed into civil war and Iraq's government discriminated against its Sunni minority, Baghdadi galvanised the remnants of al-Qaeda into a fluid fighting force that took over Raqqa in Syria in 2013 and then Iraq's second city of Mosul the following year.
His brutal and destructive self-proclaimed IS "caliphate" lasted five years and attracted thousands of jihadists from around the world. But in March 2019, it lost its last piece of territory at Baghuz in Syria.
IS has since vowed to carry on fighting a "war of attrition" against its enemies.

Who is Abu Bakr al-Baghdadi?

The IS leader has been described as the world's most wanted man.
In October 2011, the US officially designated him a "terrorist" and offered a reward of $10m (£5.8m at the time) for information leading to his capture or death. This was increased to $25m in 2017.
Baghdadi has a reputation as a highly organised and ruthless battlefield tactician.
He was born near Samarra, north of Baghdad, in 1971, and his real name is Ibrahim Awad al-Badri. 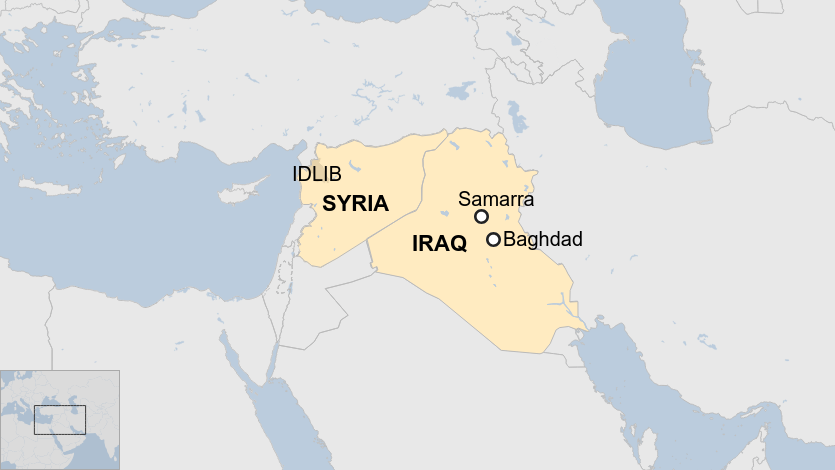 Reports suggest he was a cleric in a mosque in the city around the time of the US-led invasion in 2003.
Some believe he was already a militant jihadist during the rule of former Iraqi leader Saddam Hussein. Others suggest he was radicalised during the time he was held at Camp Bucca, a US facility in southern Iraq where many al-Qaeda commanders were detained.
He emerged in 2010 as the leader of al-Qaeda in Iraq, one of the groups that merged with IS, and rose to prominence during the attempted merger with the al-Nusra Front in Syria.
IS released a video of a man it said was Baghdadi earlier this year. Before this, he had not been seen since 2014, when he proclaimed from Mosul the creation of a "caliphate" across parts of Syria and Iraq.
News