13 Million Nigerian Children Too Short For Their Age, 2.9 Million Are Wasted -UNICEF 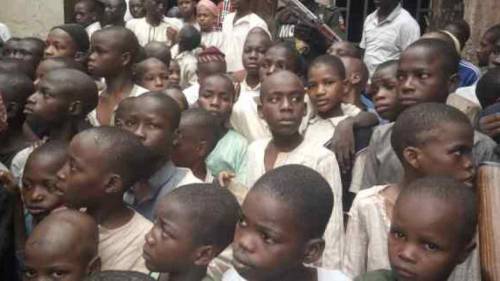 An alarmingly high number of children are suffering the consequences
of poor diets and a food system that is failing them, UNICEF warns in
a new report.


The latest report was on children, food and nutrition, and as the
United Nations and partners commemorate World Food Day.
The State of the World’s Children 2019: Children, food and nutrition
finds that at least 1 in 3 children under five – or 200 million – is
either undernourished or overweight. Almost 2 in 3 children between
six months and two years of age are not fed food that supports their
rapidly growing bodies and brains. This puts them at risk of poor
brain development, weak learning, low immunity, increased infections
and, in many cases, death.
The report provides the most comprehensive assessment yet of
21st-century child malnutrition in all its forms. It describes a
triple burden of malnutrition: undernutrition, hidden hunger caused by
a lack of essential nutrients, and overweight among children under the
age of five, noting that around the world: 149 million children are
stunted, or too short for their age, including 13.1 million children
in Nigeria; 50 million children are wasted, or too thin for their
height, including 2.9 million children in Nigeria.
The report warned that poor eating and feeding practices start from
the earliest days of a child’s life.
Though breastfeeding can save lives, for example, in Nigeria, only 27
percent of children under six months of age are exclusively breastfed
and an increasing number of children are fed infant formula.
This means many Nigerian children are missing out on the life-saving
benefits of breastmilk which is a baby’s first vaccine and offers the
best possible nutrition at the start of life.
In Nigeria, malnutrition remains a major public health and development
concern:49 percent of children under five years of age are not growing
well (they are either stunted, wasted or overweight).
This is the second-highest proportion after the Democratic Republic of
Congo in the West and Central Africa region.
This is partly because 34 percent of children between six months and
two years of age are fed food that is not rich and diversified enough
to ensure optimal growth.
As children begin transitioning to soft or solid foods around the
six-month mark, too many are introduced to the wrong kind of diet,
according to the report.
As children grow older, their exposure to unhealthy food becomes
alarming, driven largely by inappropriate marketing and advertising,
the abundance of ultra-processed foods in cities but also in remote
areas, and increasing access to fast food and highly sweetened
beverages.
The report also noted that climate-related disasters cause severe food crises.
Drought, for example, is responsible for 80 percent of damage and
losses in agriculture globally, dramatically altering what food is
available to children and families, as well as the quality and price
of that food; Nigeria is also affected by climate change.
To address the growing malnutrition crisis in all its forms, UNICEF is
issuing an urgent appeal to the government, the private sector,
donors, parents, families, and businesses to help children grow
healthy by: "Investing more resources in interventions aimed at
preventing malnutrition among young children and supporting treatment
when prevention fails.
"Supporting nursing mothers to adequately feed and care for their children.
"Empowering families, children and young people to demand nutritious
food, including by improving nutrition education and using proven
legislation – such as sugar taxes – to reduce demand for unhealthy
foods.
"Driving food suppliers to do the right thing for children, by
incentivizing the provision of healthy, convenient and affordable
foods."
It added: "Building healthy food environments for children and
adolescents by using proven approaches, such as accurate and
easy-to-understand labelling and stronger controls on the marketing of
unhealthy foods.
"Mobilizing supportive systems – health, water and sanitation,
education and social protection – to scale up nutrition results for
all children.
"Collecting, analyzing and using good-quality data and evidence to
guide action and track progress."
News