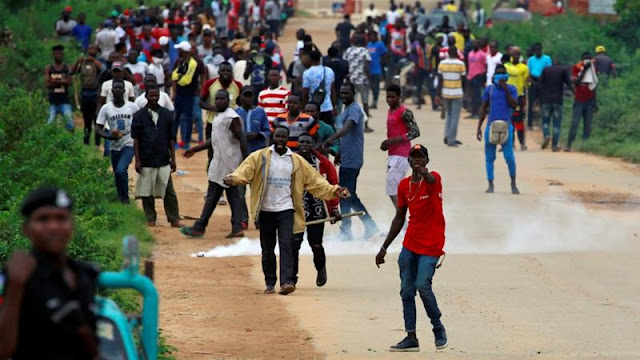 Nigeria has pulled out of an African economic summit in South Africa, intensifying a diplomatic row after a series of deadly attacks on foreigners, including Nigerians, in South African cities.


The withdrawal of Nigerian Vice President Yemi Osinbajo from the World Economic Forum (WEF) gathering in Cape Town cast a cloud over initiatives to boost intra-African trade. He was scheduled to address a panel on universal energy access on Thursday.
The rioting has killed at least five people in Johannesburg and Pretoria in recent days.
On Wednesday, South African companies MTN and Shoprite closed stores in Nigeriaafter retaliatory attacks on their businesses.
"I lost millions of naira," said Jadesola, a boutique owner at Surulere mall that also houses a Shoprite outlet in the commercial capital, Lagos. "Everything I have is invested there. All my sweat."
With tears in her eyes, she asked Al Jazeera to only publish her first name for security reasons.
The political repercussions of the violence also continued to unfold.
"Clearly with this climate, he [Osinbajo] and Mr President have agreed that he should not go [to WEF]," Nigerian Foreign Minister Geoffrey Onyeama told a news briefing.
Summit organisers confirmed Osinbajo would not attend the three-day summit, which started on Wednesday.
Nigeria also recalled its high commissioner to South Africa, News Agency of Nigeria (NAN) reported, citing a presidential source.
South African President Cyril Ramaphosa, on a charm offensive to attract $100bn of new investment, tried to limit fallout from the violence, which has rekindled memories of previous deadly attacks on foreigners that also led to reprisals on South African businesses abroad.
Ramaphosa said on Wednesday that South Africans should never take justice into their own hands against people from other countries.
"We need to quell those incidents of unrest," Ramaphosa said. "South Africa must be a country where everyone feels safe," he said, also condemning the recent incidents in which women had been killed.
Meanwhile, Rwandan President Paul Kagame and Malawi's Peter Mutharika also pulled out of the Cape Town conference, but their governments did not give an official reason for their no-show.
WEF spokesman Oliver Cann said Kagame and Mutharika had informed conference organisers by Saturday - before the attacks had started - that they could not attend.
South Africa's Department of International Relations and Cooperation, commenting before Nigeria announced Osinbajo's withdrawal, said the attendance was "satisfactory".

Police in South Africa have yet to pinpoint what triggered the violence, which began on Sunday when protesters armed with makeshift weapons roamed the streets of Pretoria's business district, pelting shops with rocks and petrol bombs, and running off with goods.
Police have made almost 300 arrests, while people across the continent have protested and voiced their anger on social media.
Al Jazeera's Haru Mutasa, reporting from downtown Johannesburg, said: "Some shops and businesses haven't opened for days. The owners are afraid there could be more violence and looting."
Somadoda Fikeni, a policy and political analyst at the University of South Africa, said the unrest had multiple causes.
"The issue of foreign nationals, blaming them for many things which are not going well in the country and also the law enforcement and the economic conditions in the country, all of these combined, if not managed well, then create this cyclical tension between foreign nationals and locals, especially those who are in the margins because the middle class and those who are in the upper class, you hardly ever hear of such tension getting into this level," he told Al Jazeera from Pretoria.

In Nigeria, police said security had been strengthened around South African businesses after apparent reprisal attacks in several cities against stores operated by the supermarket chain Shoprite, MTN and other firms.
The Nigerian division of South African telecom operator MTN said on Wednesday it would shut all stores and service centres in the country until further notice after its facilities in three cities were attacked.
"The safety and security of our customers, staff and partners is our primary concern," MTN Nigeria said in a statement. "MTN condemns any acts of violence, prejudice and xenophobia."
Nigeria is MTN's biggest market, with 58 million users in 2018, and accounts for a third of the South African group's core profit. 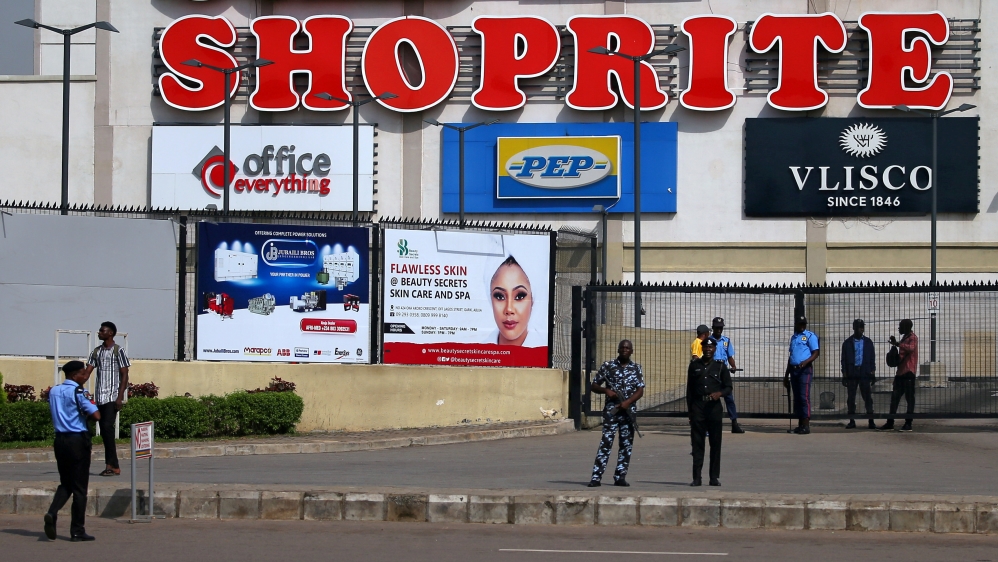 Security officlals are seen at the gate of Jabi Lake mall in Utako, Abuja [Afolabi Sotunde/Reuters]
At a Shoprite supermarket on the outskirts of the Nigerian capital, Abuja, hundreds of protesters tried to break into the premises, throwing stones, setting fire to tyres and nearly overwhelming police protecting the site.
Retaliatory attacks also took in the university town of Ibadan and the city of Uyo on Tuesday evening, Nigeria's government said in a statement.
Nigerian Foreign Minister Onyeama on Wednesday implored people to stop attacking these businesses.
"These businesses, Shoprite, MTN and others, yes, they are South African," he said at a press briefing.
"But these are subsidiaries in Nigeria owned by Nigerians. So, as attacks are made against Shoprite and other such institutions, it is actually the property owned by Nigerians within Nigeria and the people working there are Nigerians."
In recent years, attacks against foreign-owned businesses in South Africa have become a regular occurrence as frustration has increased over mounting unemployment, currently at a decade-high of around 29 percent.
Some 60 people were killed in attacks directed at foreigners in 2008 and at least seven more in 2015.
Meanwhile, tensions have also wafted into the entertainment industry as some of the top celebrities in the two countries exchanged angry patriotic tirades.
Nigeria's Tiwa Savage, one of the continent's best-known superstars, pulled out of performing at the DSTV Delicious Festival later this month in South Africa, while calling for peace and describing the attacks as "the barbaric butchering of my people".
South African rapper Casper Nyovest also called for peace in the country saying he was "embarrassed" by what was now a "recurring issue".
Eromo Egbejule contributed to this report from Lagos
News